I apologise for the embarrassment, Aisha Buhari says over leaked video 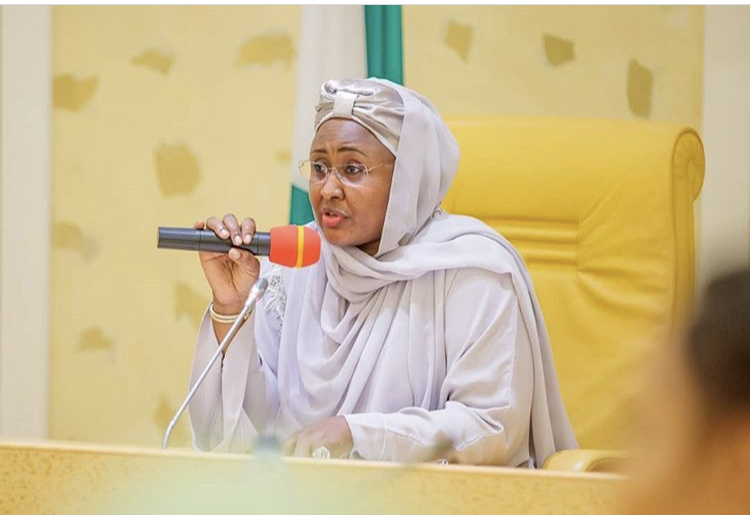 The wife of the president of Nigeria, and Nigeria’s First Lady, Aisha Buhari, has apologised to her children, family and well-meaning Nigerians over the viral video of her circulating on social media.

Aisha Buhari apologised for the “embarrassment” on Wednesday, when she received the wife of the Vice President, Dolapo Osinbajo, governors wife, senate president’s wife and senators wives, speaker’s wife and wives of members of the House of Representatives, who paid her a courtesy visit after her return to the country.

She commended them for their continued support and partnership with her NGO, the Future Assured Programme.

Reacting via her instagram handle; aishambuhari, the First Lady wrote: “I am happy to have received the wife of the Vice President, governors wife, senate president’s wife & senators wives, speaker’s wife & wives of members of the House of Representatives, who paid me a courtesy visit after her return. I use this opportunity to commend them for the good work they are doing in their various states, and in collaboration with my Future Assured Program. I also advise them not to succumb to any form of distraction caused by social media or any form of communication. I use this opportunity to apologise for the embarrassment I might have caused my children, my immediate family members, well meaning Nigerians and the institution I represent, on the circulated leaked video clip. Long Live the Federal Republic of Nigeria.”

Recently, a video was released online by Fatima Daura, daughter of President Buhari’s nephew, Mamman Daura, showed Aisha Buhari’s shouting on the need for the Dauras to leave an accommodation in the Villa.

The video was released in the wake of the rumour claiming President Muhammadu Buhari was taking a second wife; the Minister of Humanitarian Affairs, Disaster Management and Social Development, Sadiya Umar Farouq on Friday.

Aisha had admitted to the BBC Hausa Service, that she was the woman speaking in the video and explained the circumstance.

“I was the one in that video and this person you see standing at my back are my security personnel.

“It was Fatima, the daughter of Mamman Daura that shot the video in front of my security and everybody there. She was actually recording the whole thing right in front of me and was laughing and mocking me.

“They did that because my husband sacked them from the house. He told them to get all their belongings and leave the house for my son (Yusuf) to occupy.

“I left them and wanted to get to one of the rooms but they prevented me from getting through, I left them and took another way yet I met the store locked.”

Aisha BuhariFatima Daura
Share
Subscribe to our newsletter
Sign up here to get the latest news, updates and special offers delivered directly to your inbox.
You can unsubscribe at any time

2 weeks after Buhari’s visit to South Africa, another Nigerian stabbed to death

The world must not sleep-walk into another debt crisis – Patricia Scotland, Commonwealth Secretary-General