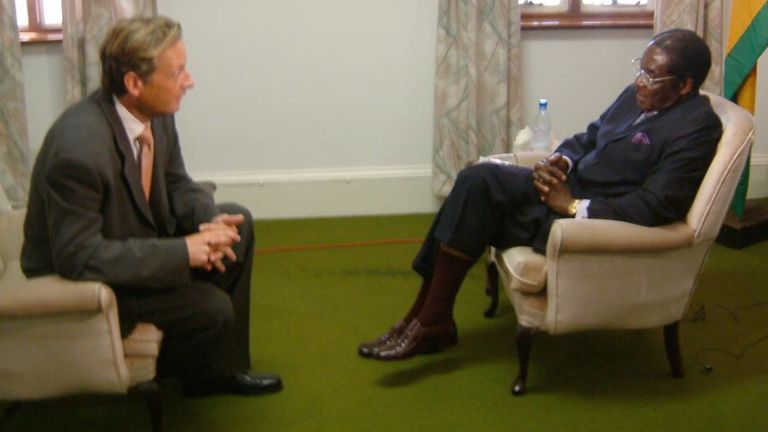 Stuart Ramsay interviewing Robert Mugabe in 2004
Sky news chief correspondent, Stuart Ramsay, the third foreign journalist to ever interview Robert Mugabe, recalls the 2004 meeting.
Recalling his experience with the Zimbabwean ex-president, Robert Mugabe, who died on Thursday, September 6, 2019, at the age of 95, Ramsay said he was petrified.
“My palms were sweating. I couldn’t talk to my colleagues. I kept going over my notes and my questions time and again; imagining a scenario where an interview we had worked to set up for over a year would be a disaster, with me to blame.
“We were in the ante room of the office of the Zimbabwean president Robert Mugabe.
“He rarely gave interviews and we had been threatened with arrest, imprisonment and deportation, and had been subjected to a barrage of abuse from Zimbabwe’s government ministers on television and in newspapers.
“However, there we were, just a few feet away from a man who had dominated southern African politics for decades. A man accused of murder, human rights abuses, kleptocracy, political fraud and racism.
“But he was also a man revered by black African leaders and black people. A revolutionary soldier who fought in the bush, who served years in prison, who took control of a nation and ended white-minority rule.
“A man who went to the United Nations and told the West, and anyone else who would listen, that Africa wasn’t for being pushed around anymore; that black people had the right to be treated with respect and their international observations given equal weighting to anyone else.
“See what I mean? I was petrified!
We were called in. We had 10 minutes to set up lights and cameras, check sound, make sure we were ready. Then he walked in. I moved towards him to shake hands, he was humming a song, I think.
“He was small, immaculately dressed, his moustache and hair perfect, his skin beautifully smooth and shining. This was absolute power personified.
“He cared not a jot what I was going to ask him. He was mildly interested that we were there and that his staff had arranged for the interview to take place. I was certain right then that the interview we had sweated over day and night for months was nothing more than a brief interlude in his morning,” he narrated.
Ramsay further added that he saw the hands of Sky cameraman, Garwen McLuckie, shaking as he attached the microphone to Mugabe’s lapels while they exchanged pleasantries about the weather and their families.
“Honestly, I would have laughed if I could have but I could barely swallow. Then we were off.
“My nerves disappeared, I wasn’t going to let him off anything. I was prepared, I had the economic figures, I had seen the victims of torture, been chased by his thugs, I knew the history.
“As the third foreign journalist to ever interview President Mugabe, I felt the weight of responsibility and in the first moments I felt enormously honoured to represent everyone who ever wanted to ask this dictator a question.
“I remember at one point really getting under his skin and he threw a bottle past me in disgust.
“We had been scheduled 15 minutes. I think we exchanged with each other for well over an hour.
“He loved it. He didn’t care what I thought; he wanted to explain himself and I let him.
I have never been a shouty aggressive interviewer. I believe the guilty will hang themselves. I think he did. Nobody can argue the indefensible for ever.
“Eventually the staff called the interview to an end. I thanked him and we posed for pictures.
“He was an utter gentleman and very engaging. We talked about holiday destinations and I said I liked travelling in Africa and he said he particularly liked the Far East.
“That morning I had read in the papers that two journalists had been imprisoned for the slanderous allegation that the president had just returned from Singapore on vacation.
Says it all I guess, but what an experience,” he further explained.
(Culled from sky news)
SHARE THIS ARTICLE 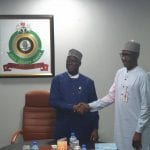 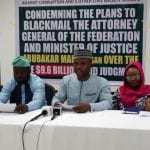