The British Airways London Heathrow to JFK Airport has been officially recognised as the world’s most lucrative airline routes.

British Airways was the only airline to break the $1 billion mark, with its London Heathrow to New York’s John F Kennedy International Airport route making $1.15b in the last year. Qantas’s Melbourne Airport to Sydney Airport came in second with revenue of $861m, while Emirates came in a close third with $796m. That equated to 31, 943 scheduled flying hours between Heathrow and Dubai. 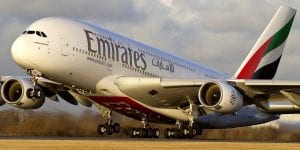 Raking in almost $800 million in revenue for the 12 months to March 2019, Emirates’ seven-hour flight between London Heathrow and Dubai International Airport is only superseded by routes operated by British Airways and Qantas Airways in the list of the top 10 highest revenue routes, complied by UK-based air travel intelligence company OAG.

The top ten airlines were unchanged between 2017 and 2018, OAG said. However, total revenue across the board dipped slightly year-on-year.

In a list of top European routes, Emirates came second with its Heathrow to Dubai International flight, while Etihad also made the list, coming in at number 10 with its own Heathrow flight to Abu Dhabi.

Emirates also dominates the African market, coming out on top with its Johannesburg to Dubai flight, and then three other times in the top ten, with flights from Cairo, Capetown and Mauritius.

British airwaysDubaiEmiratesLondonNew-York
Share
Subscribe to our newsletter
Sign up here to get the latest news, updates and special offers delivered directly to your inbox.
You can unsubscribe at any time