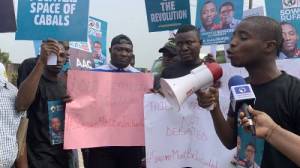 Share
•As Lagos Organisers Change Venue, Continues On Tuesday
#RevolutionNow activists on Monday stormed the National Human Rights Commission (NHRC), Maitama, in Abuja, to protest against the poor security situation and other social issues in the country.
The protesters were forced to change the venue to NHRC after Armed security operatives took over the popular Unity Fountain in Abuja, which was earlier scheduled for the protest.
The protesters delivered a letter to the NHRC, where they expressed displeasure over what they called “the continued silence of the Commission over the undemocratic incidences in the country.”
According to the Coordinator of the protest, Dare-Atoye Ariyo “The ever-growing proclivity of the President Buhari-led regime for human rights abuses are indicative of a complete departure from all democratic tenets, norms and practices.”
He further condemned the arrest of the #RevolutionNow protest convener, Omoyele Sowore, by the Department of State Services, describing it as undemocratic and disgraceful.
Atoye said: “We believe that these events are not only undemocratic, but they are also disgraceful for a country like Nigeria that practices constitutional democracy.
“However, we are completely dissatisfied by the eerie silence of the National Human Rights Commission in the face of these undemocratic developments.
“Our dissatisfaction is further aggravated by the fact that the role of the NHRC in defending the constitutionally guaranteed rights of Nigerians is well-revered and dearly treasured by Nigerians.”
However, the organisers of the #RevolutionNow protest in Lagos have vowed to continue their protest on Tuesday, August 6, after armed police and soldiers dispersed the protesters.
The conveners who made the disclosure at a press conference on Monday in Lagos, insisted that they would converge on the Freedom Park in Ojota area despite facing resistance from the police today.
The conveners which comprise of members of a coalition of different civil society organisations, accused the police of firing canisters of tear gas at protesters who gathered peacefully in Surulere area of the state.
#RevolutionNowAbujaLagosMohammadu BuhariNational Human Rights CommissionOmoyele SoworePolice
Share
Subscribe to our newsletter
Sign up here to get the latest news, updates and special offers delivered directly to your inbox.
You can unsubscribe at any time