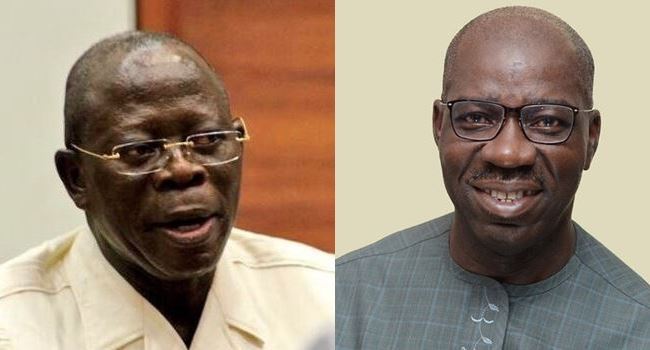 The Joint Action for the Advancement of Democracy in EDO (JAADE), have expressed dismay over the lingering crises in the Edo State House of Assembly.

According to the group, the crises is precipitated by the improper inauguration of the House in the night of Monday, June 17, 2019.

JAADE, who disclosed this in a press statement signed by its Organizing Secretary, Engr. Lukeman Momoh,
accused Edo State Governor, Mr. Godwin Obaseki, of purportedly encouraging the circumvention of the legislative due process of proper convening, inauguration, election of presiding officers and swearing in of members.

The aftermaths of the governor’s alleged interference in the affairs of the State Legislature are the emergence of his anointed candidate, Frank Okiye, who was elected at the controversial inauguration attended by only nine of the 24 members of the exclusive All Progressives Congress (APC) caucus in the House and the lingering crisis.

The statement read in part: “After much intimidation and harassment through the use of state machinery, to coerce the other members to present themselves for swearing in, we have noticed the continued refusal by no fewer than fourteen members to submit to an illegitimate House of Assembly.

“It is about six weeks now and the crisis has yet to be resolved despite interventions at different levels; royal, presidential and federal legislative interventions. The crisis must not be allowed to fester as it affects the smooth operations of the House of Assembly.

“We note in particular the decision of the House of Representatives calling on Governor Godwin Obaseki to issue a fresh proclamation for proper inauguration of the Edo State House of Assembly, the extended deadline to do so; otherwise, the National Assembly will take over the running of the Edo Assembly.

“While the concurrence of the Senate, whose ad hoc committee’s investigation report has yet to be submitted for further legislative action, is being awaited, we wish to express our disappointment at the mismanagement of the dominance and control of Edo Assembly by the APC.

“The APC and its national chair, Comrade Adams Oshiomhole, must double down and escalate the necessary interventions in the circumstance to restore sanity to and enthrone legitimacy in the Edo State House of Assembly.”

JAADE also noted that the APC under Oshiomhole’s leadership cannot afford to allow the current undemocratic situation in the Edo Assembly to prevail.

“The APC leadership, under Oshiomhole, must replicate the democratic exemplars in the inauguration of the Senate and the House of Representatives, where the party lobbied for support for its candidates to emerge as senate president and speaker in a legally-convened and inaugurated federal legislature that witnessed proper election.

“Until the APC leadership resolves the logjam in favour of propriety and legislative due process, the Edo Assembly debacle will remain a huge joke,” the statement added.

Adams OshiomoleAPCEdo house of assemblyEdo stateGodwin ObasekiJAADE
Share
Subscribe to our newsletter
Sign up here to get the latest news, updates and special offers delivered directly to your inbox.
You can unsubscribe at any time