Police in United States say Ayoola killed Mackenzie Lueck and then burned her body in his backyard.

He was kind to visitors and those who stayed in his home, which he rented as an Airbnb, according to his roommate. But other times,  his temper would flare over small things, like the positioning of furniture.

Police say Ajayi met Lueck at the park after taking a Lyft from the airport. It was not immediately clear how or whether the two had known each other previously but police said they had communicated electronically the day before she disappeared.

Lueck, 23, was last seen in the early hours of June 17. She landed at the Salt Lake City airport around 2 a.m., then at 2:40 a.m. she took a Lyft from the airport to Hatch Park in north Salt Lake City, police said.

The Lyft driver told police that Lueck met an individual at the park and did not appear to be in distress, police said.

All communications from Lueck’s cell phone stopped on at 3 a.m. that morning, Brown said.

Phone records show that Lueck and Ajayi were both at Hatch Park within less than one minute of each other, Brown said.

Ajayi admitted to police that he and Lueck texted about 6 a.m. on June 16, but said that they did not text after that time, said Brown. He told police “he did not know what Mackenzie looked like and denied having seen a photo or online profile of Mackenzie, despite having several photos of her and a profile photo,” Brown said.

His home was searched on last Wednesday night when he was considered a person of interest, police said
During that search, Ajayi’s neighbors told police they saw him using gasoline to burn something in his backyard on June 17 and 18, police said.
Police found a “fresh dig area” there, Brown said.

“A forensic excavation of the burned area was conducted, which resulted in the finding of several charred items consistent with personal items of Mackenzie Lueck,” he said.

Brown says burned evidence, including Lueck’s remains and personal belongings, was found at his home when it was searched on Wednesday and Thursday. Ajayi had previously been identified as a person of interest in Lueck’s disappearance. 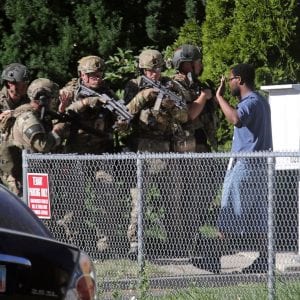 “The death of Mackenzie Lueck is devastating news,” university President Ruth Watkins said in a statement on Friday. “On behalf of the university, I express our heartfelt sympathy to the family, friends and classmates of Mackenzie during this very difficult time.”

As her family and friends mourn, Lueck’s connection to the suspect and details about the alleged crime remain unclear.

Lueck was a part-time student at the University of Utah in her senior year majoring in kinesiology and pre-nursing. She has been a student since 2014 and has an off-campus apartment.

She is from El Segundo in the Los Angeles area and flew to California for a funeral before returning to Salt Lake City, police said.

Her family reported her missing on June 20 and became more concerned after she missed a planned flight back to Los Angeles last weekend.

Then in 2014, Ajayi’s life took a turn for the worse. He became the suspect in a rape investigation, the North Park Police Department said Friday. The investigation was dropped, however, after the woman decided not to press charges.

Five years later, he again finds himself the subject of a police investigation.

Ayoola AjayiMackenzie Lueck
Share
Subscribe to our newsletter
Sign up here to get the latest news, updates and special offers delivered directly to your inbox.
You can unsubscribe at any time