NSIP And Buhari’s War On Poverty 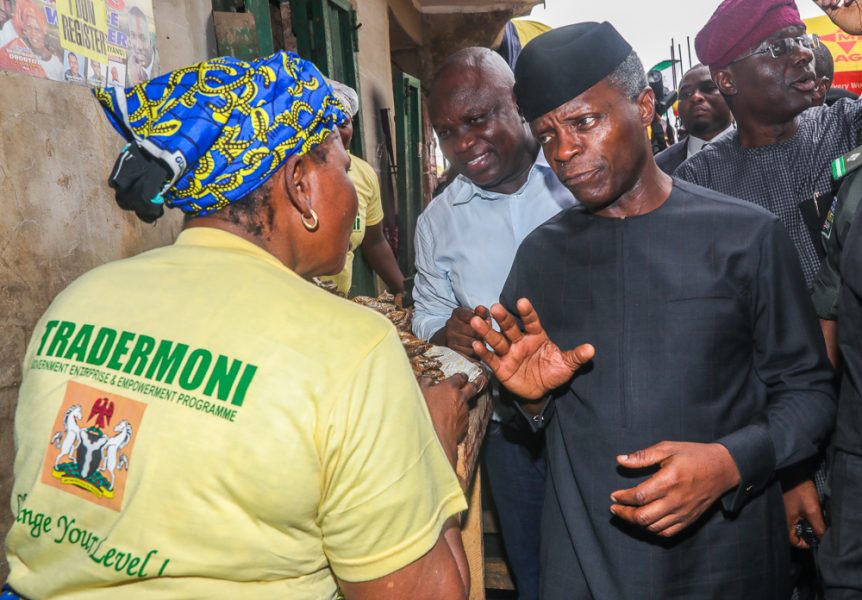 With 80 million Nigerians classified as poor, the war against poverty is not only a herculean task, but presents formidable challenges to the present administration which has launched a frontal and unwavering war against poverty.

The ongoing war under the aegis of the National Social Investment Programme (NSIP), headed by Mrs. Mariam Uwais, the Special Adviser to the President on the programme,  represents one of the successes of the Buhari Presidency in terms of its conceptual framework, delivery and impact in tackling grinding poverty which is pervasive in our society.

In evaluating the NSIP intervention, it is critical to note that its success story is located in the meticulous planning and broad vision of the managers of the programme. The programme in setting out and defining the poorest of the poor, who are the main beneficiaries of the programme, devised a strategy which ensured that the selection process was insulated from the outside control of influence peddlers and political predators.

Having identified 80 million Nigerians as poor, and as a result of the paucity of funds, it selected 30 per cent from each state and senatorial districts to be the first batch of beneficiaries. It achieved this threshold by working closely and in concert with the states and the National Bureau of Statistics (NBS).

By all ramifications, the vision of the National Social Investment Programme is laudable, and represents a bold attempt by the Buhari Presidency to stop rampaging poverty on its tracks by re-distributing wealth and  lifting millions of Nigerians out of grinding poverty.

As at date, the Social Investment Programme has benefitted 7.9 million Nigerians since inception and has a presence in all the 36 states and the Federal Capital Territory. Its set targets through its various schemes are ambitious and reflect government’s commitment to curtailing poverty. For example, the N-Power seeks to provide 500, 000 jobs to unemployed graduates. Presently, 200, 000 graduates have benefited from the scheme and are currently gainfully employed in various institutions across the country. The programme has completed the selection of the next batch of 300, 000 beneficiaries who will soon be engaged. Government Enterprises and Empowerment Programme (GEEP) seeks to provide loans to a minimum of 1.6 million small and medium sized enterprises with established cooperatives. So far, 259, 541 beneficiaries of 4, 784 cooperatives have been paid nationwide with the next batch of 148, 611 loans approved for disbursement.

The National Home Grown School Feeding Programme (NHGSFP) is a success story as it is presently providing a meal a day to about seven million school children in primary 1-3 across the nation.

In the non-graduate category of N-Power, 20, 000 more beneficiaries have been selected for training in 34 states. Also, the Humanitarian

Hub in Adamawa state has taken off and is supported by the ICRC, PCNI, and NEMA. The Lagos Climate Hub supported by World Bank and Lagos Business School (LBS) is on stream with other hubs situated in the six geo-political zones of the country and are at various stages of development.

With its impressive performance so far, it is not surprising that the National Social Investment Programme has continued to attract plaudits from Nigerians, stakeholders and international organizations.

Reviewing the performance of the programme, the Nigerian Economic Summit Group (NESG) commended the programme for delivering measurable results in accordance with its core mandate. According to its empirical review of the group, NSIP is meeting its targets, objectives and outcomes across the country.

In the same vein, Action Aid Nigeria, an international non-profit organization, has praised the effectiveness and performances of the programme, stating that it is improving the lives of citizens. Action Aid, after its independent audit which included N-Power Programme, Home Grown School Feeding Programme (HGSFP) and the GovernmentEnterprise and Empowerment Programme (GEEP), concluded that the programme is a huge success.

In arriving at its conclusion, the Action Aid monitored the programmes under review in 35 states of the federation. Its personnel interviewed over two million Nigerians (beneficiaries and non-beneficiaries) with quarterly feedback sessions and suggestions on how to improve service delivery to the citizens. Based on empirical evidence evaluation and from the testimonies ofnNigerians, state actors and non-state actors, the National Social Investment Programme is succeeding in achieving its core mandate of reducing poverty and re-distributing wealth. Nigerians of all political persuasions should support this laudable programme of government that has made positive impact on the lives of citizens.

For the programme to make a greater impact, there is the need to fund it adequately. Since its inception, one of its challenges has been inadequate funding. Out of the N500 billion budgetary allocation on a yearly basis, only 15 percent of the total sum is released. This has hampered its operations. Under the present leadership of the programme, it has created positive impacts in addressing poverty, and a lot will be achieved with better funding of the pragramme.

Tayo wrote in from Abuja
NSIP
Share
Subscribe to our newsletter
Sign up here to get the latest news, updates and special offers delivered directly to your inbox.
You can unsubscribe at any time

Presidential Election Petition Tribunal: All you need to know about Justice Garba