Helicopter crash: My death would have put Kogi, many in trouble – Osinbajo 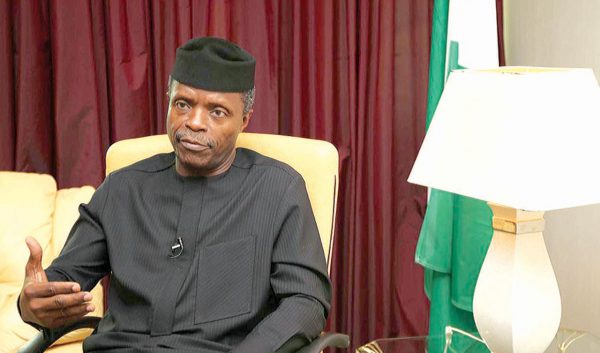 Share
The Vice President, Yemi Osinbajo, has disclosed that those in charge of his security, the government of Kogi State, as well as those not connected with his entourage would have been in trouble if he had died in the February 2nd helicopter crash.
Osinbajo escaped death, after the helicopter conveying him and his team crash-landed in Kabba, Kogi state.
Don't Miss

Jan 27, 2023
He however, continued with his engagements and plans for the day in Kogi State, as neither him nor other occupants of the helicopter suffered any serious injuries.
The Vice President stated this on Sunday during a thanksgiving service at the Aso Villa Chapel, Abuja, to celebrate the re-election of President Muhammadu Buhari and Vice President Yemi Osinbajo at the recent presidential election.
According to him, “On February 2nd, God gave me reason to know that but for his grace we would have been consumed, when our helicopter crashed.
“When the crashed occurred, for a moment there was complete silence. For a second, it occurred to me that if we had died that is what it would have been, complete silence. But we all got out without a scratch. God delivered us.

“God also delivered those in charge of our security, the government of Kogi State would have also been in trouble. We give God all the glory. I pray God will also be kind to you all also, that you will never be lacking in support, care and genuine prayers.”
Osinbajo said if he was told before 2015 that he would have been in politics, talk less of touring the whole 36 states of the federation plus the federal capital territory, he would have doubted it.”
He further stated that, “I am constantly reminded by my wife that she wanted a quiet life, which I promised as an academic but here we are today.
“I know that I don’t have special qualification all the exaltation comes from God.”
The Assistant General Overseer and Pastor in charge of Northern Region of the Redeemed Christian Church of God, Pastor Ezekiel Odeyemi, who delivered the sermon for the day, thanked God for preserving Vice-President Yemi Osinbajo and his family from evil since he assumed office.
Odeyemi recalled the apprehension that preceded the general elections and asserted that the aftermath however, programmed that “God is Nigerian”, which is why peace has returned to the land.
Noting that war was not something anyone should wish even his enemies, he stressed that the challenge facing the nation notwithstanding, Nigerians owe God thanksgiving and gratitude.
The thanksgiving was attended by Governor Kayode Fayemi of Ekiti State, President of Christian Association of Nigeria, Samson Ayokunle; former head of state, Yakubu Gowon, and and his wife; Secretary to the Government of the Federation, Boss Mustapha; members of the Federal Executive Council, the Legislature and Judiciary, members of the Diplomatic Corps and distinguished clergy, among others.

Aso Villa ChapelBoss MustaphaKayode FayemiKogiMohammadu BuhariProfessor Yemi OsinbajoRedeemed Christian Church of GodYakubu Gowon
Share
Subscribe to our newsletter
Sign up here to get the latest news, updates and special offers delivered directly to your inbox.
You can unsubscribe at any time