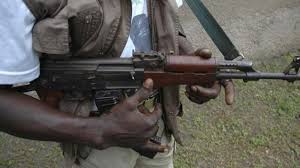 “They shot Prof.  Dooshima who is the Returning Officer for Gboko LG, so after they shot her,  we drove straight to INEC headquarters so that we can make a comment, said an eye-witness. ” She is in the hospital.”

According to him,  the INEC officials were on their way from Gboko to Makurdi when they were attacked.

He said, “Around 6pm after the EO and Returning Officer of Gboko declared the winner of the constituency,  they arranged everything,  we moved from Gboko to Makurdi around 9pm.

“On our way to Makurdi some group of men,  armed thugs started shooting at the INEC vehicle that was conveying the materials to Makurdi.

BenueINEC
Share
Subscribe to our newsletter
Sign up here to get the latest news, updates and special offers delivered directly to your inbox.
You can unsubscribe at any time

Lalong withstands challenge from Useni to win re-election in Plateau