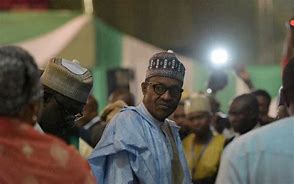 Some Nigerians said the decision of President Muhammadu Buhari to suspend Walter Onnoghen, as the Chief Justice of Nigeria is illegitimate and vow to vote for the opposition PDP in next month’s presidential elections to put an end to ‘one-man rule’ and a more representative democracy.

While, many of the president’s supporters said they backed President Muhammadu Buhari because they trust him to lead Nigeria through turbulent economic times. They also point to his championing of corruption fights.

“He delivers on what he says, and is trustworthy and just,” said Musbau Akanni.

” CJN is a PDP member…perhaps. Or most probably, corruption is PDP, said Segun Dele Dipe on Facebook.

Dele Momodu on Twitter said the ‘noise on the war against corruption should be changed to ‘war against opposition.’

“And protection of friends of ruling saints.”

“So every allegation should lead to resignation? What a smart way of eliminating perceived enemies; one of the reasons I respect SARAKI who defended himself like a man and shamed his tormentors, the Ovation publisher said.

“One way to figure out how democracy decay and die is when a leader shows a weak commitment to democratic rules, says Adam Ontiri on twitter.

“This is another one of a string of events that indicates that this election will not be credible and will be challenged no matter who emerges as the winner,” Adedayo Ademuwagun, a Lagos-based analyst at the risk advisory group Songhai Advisory LLP.

Lanre Ologunoye on his facebook page said, Buhari this is not a Military dictatorship, the CJN doesn’t work for you. If you are educated you will know.

Martin Ezinamo said “Point of correction: Buhari did not suspend the CJN—the man, as in 1983 coup, just suspended the Nigerian constitution.

In a statement shared on most media platforms a former president of the Nigeria Bar Association (NBA), Chief Olisa Agbakoba (SAN), said the president’s action “is the most brazen assault on Nigeria’s constitutional history, criticizing Mohammed the acting CJN for accepting to be sworn in.

Totalitarian Tyrant or Trusted Leader?
Share
Subscribe to our newsletter
Sign up here to get the latest news, updates and special offers delivered directly to your inbox.
You can unsubscribe at any time