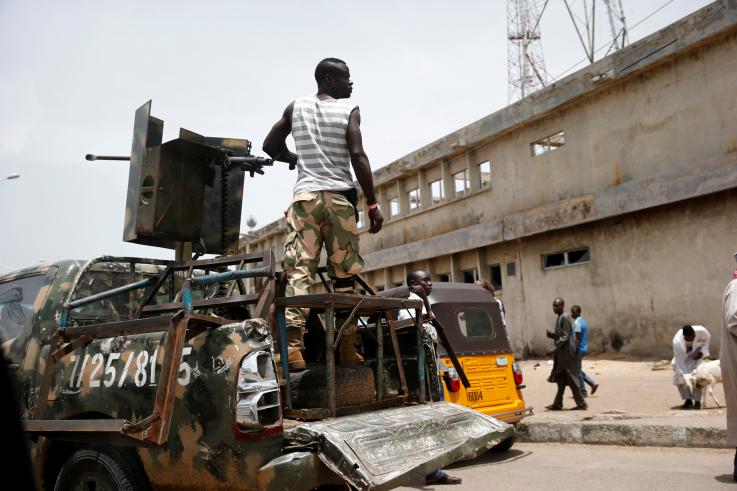 The civil society organisations in the country have openly differed with the federal government over the activities of Boko Haram in the country.

The CSO’s said that the dramatic rise in insecurity the country, particularly in the north east is a confirmation that Boko Haram has not been ‘technically defeated’.

Executive Director Civil Society Legislative Advocacy Centre (CISLAC) and Head of Transparency International Nigeria as well as the Chairman board of trustee Amnesty International-Nigeria, Auwal Musa Rafsanjani, who addressed a world press conference on behalf of 11 others CSOs,  described the government claims as false, noting that no Nigerian in the country currently feels safe.

“There has been a spectacular rise of insecurity in the country over the past few months. The Boko Haram insurgency has found a new lease of life and has been organizing regular raids against the military and ordinary communities over the past six months. Clearly, the insurgents are telling the world that they have not been technically defeated as asserted by government. The conflicts between herdsmen and farmers has spread over most parts of the country and according to an Amnesty International Report, there have been 3,641 deaths from January 2016 to October 2018. The conflict has blossomed into large-scale criminality, kidnapping and rural banditry. Today, virtually no Nigerian, anywhere in the country, feels safe.”

Nigerians across board have doubted the statement following repeated attacks by the terrorists sect.

The CSOs have emphasised that next month’s election is a critical one, stressing that the success of the 2019 elections will not be contingent on the officials but the people, stressing that it will take the vigilance of the people for the elections be free and fair following the engagement of vote buying by political parties.

They said, “As the general elections approaches, Nigerians and indeed the international community are concerned about the apparent decline in the integrity of the electoral process. Civil society observers have recorded a significant expansion of vote buying in the recent Ekiti and Osun elections. Clearly, vote buying is fast becoming a norm in Nigeria as citizens are being induced to sell their mandate for crumbs that will not take them anywhere. The political party primaries were marked by massive fraud and manipulation by the political class. We are also witnessing misuse of security forces, the police and army in our elections. They are being used to intimidate voters from voting as they please. The political campaign rallies are witnessing increased violence and people are being killed. The failure of the president to accent to the Electoral Act, as amended, is another cause for concern. The failure to prioritise electoral reform, ultimately undermines our capacity to make democratic progress as a nation. The buck for this failure stops at desk of the president.”

The CSOs also condemned the recent attacks on media houses, insisting that “Every person shall be entitled to freedom of expression, including freedom to hold opinions and to receive and impart ideas and information without interference’. We must respect this right.”

They recalled that for the past three years, there have been recurring threats against civil society groups in Nigeria including Amnesty International Nigeria, adding that “It is important to point out that these threats are always issued against Amnesty International Nigeria whenever it issues a report detailing credible allegations of human rights violations in Nigeria. This shows that the attacks are aimed at gagging the organization, undermining credible human rights reporting and covering up systemic violations of human rights. Harassment of civil society activists is a clear threat to Nigerian democracy.”

Samson Itodo, head of the Youth Initiative for Advocacy, Growth & Advancement (YIAGA),  also presented the CSOs demands which include that: “Our security agencies and personnel should be equipped to defend the nation and porous borders that allow insurgents from neighbouring countries to infiltrate our country and cause mayhem.

“There should be adequate transparency in the procurement of military equipment as necessary.

“There should be a ban on the pillage of national resources that is called “Security Vote.”

“The electoral processes at the federal and sub-national level need to be free of political manipulation. The Independent National Electoral Commission (INEC) must exercise its independence and capacity to sanction breaches of the provisions of the National Electoral Act, 2010, as amended.

“Strict supervision and effective sanctioning are needed in conjunction with the pressure from the ‘grass-root’ for respectable candidates with high personal integrity and moral standing.

“We call on all political parties to strictly adhere to the rule of law and respect for press freedom and human rights in their political dealings as the nation courses towards general elections in February.

“We call on journalists and the media to be responsible within the rule of law and avoid acts that could undermine the peace and security of the nation.

“We call on the military to desist from excessive show of force to intimidate civilians whenever it feels aggrieved. The laws of Nigeria have made adequate provisions for how such should be addressed and the military should not act outside of these laws.

“We call for adequate oversight activities by relevant legislative committees in the National Assembly on the conduct of military agents across the country.

“We call on the president to reveal the findings of the Presidential Investigation Panel he established in 2017 to investigate allegations of non-compliance with human rights obligations and Rules of Engagement by the Nigerian Armed Forces in local conflicts and insurgency.

“We call on the National Assembly and anti-corruption agencies to live up to the expectations and trust placed in them by Nigerians in ensuring perpetrators of corrupt practice are brought to book, while guaranteeing adequate protection for whistle-blowing effort through enabling policies implementation and transition into legislation.

“We call on well-meaning Nigerians to support and sustain the work of CSOs to enhance the rule of law, social equity and justice.

“The Nigeria Financial Intelligence Unit (NFIU) should be proactive by following up on the Suspicious Transactions Reports which banks and financial providers flag as potential money laundering cases.”

Boko HaramBoko Haram still active in NigeriaSecurity
Share
Subscribe to our newsletter
Sign up here to get the latest news, updates and special offers delivered directly to your inbox.
You can unsubscribe at any time