The Nigerian National Petroleum Corporation (NNPC) has alerted the public of contaminated diesel that is harmful to machines and environment...
Read more

The Central Bank of Nigeria's planned disbursement of N93.2 billion out of N1 trillion intervention fund for manufacturing and agribusiness...
Read more

Judges at the International Criminal Court on Tuesday ordered for the immediate release of ex-Ivorian president, Laurent Gbagbo and his co-defendant Charles Ble Goude.

Presiding Judge Cuno Tarfusser said that prosecutors failed to prove their case and Gbagbo and his co-defendant, Charles Blé Goudé, a close ally and former political youth leader, should be set free.

Laurent Gbagbo, who was president of Ivory Coast from 2000 until 2011, is still able to mobilise a crowd of supporters who flock the premises of the International Criminal Court in the Hague, Netherlands, every time he appears.

Today, these supporters are excited and expectant, hoping for the release of their ‘heroes’, Gbagbo and his co-accused, Charles Ble Goude. 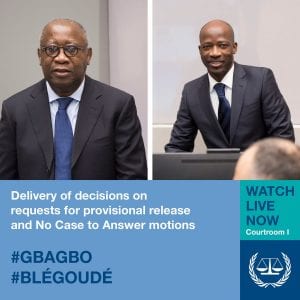 Why Gbagbo is in jail?

About 3,000 people died in clashes during what prosecutors say was an attempt by Gbagbo and Ble Goude to ignore the internationally recognised victory of Gbagbo’s bitter rival Alassane Outtara.

The pair are accused of four counts of crimes against humanity including murder, rape and persecution during post-electoral violence.

Gbagbo was arrested after a months-long standoff with Ouattara’s troops, aided by UN and French forces. He was turned over to the ICC in 2011.

Gbagbo and Charles Blé Goudé, a close ally and former political youth leader, have been on trial since 2016 for war crimes allegedly committed under Gbagbo’s leadership.

Gbagbo himself faced four counts of crimes against humanity including;

Share
Facebook
Twitter
WhatsApp
Previous articleNigeria in talks with financiers to raise $3.15bn to increase oil output
Next articlePetr Cech to retire at the end of the season
- Advertisement -

The Nigerian National Petroleum Corporation (NNPC) has alerted the public of contaminated diesel that is harmful to machines and environment being sold across the country. It...
Read more
Business

The Central Bank of Nigeria's planned disbursement of N93.2 billion out of N1 trillion intervention fund for manufacturing and agribusiness sectors has received stakeholders' commendation.   The...
Read more
Top Story

In line with the new pricing regime for petrol, marketers are now free to fix the price of the commodity, the Petroleum Products Pricing Regulatory Agency...
Read more
Photo News

Associated Press A judge set bail at $750,000 apiece Thursday for three fired Minneapolis police officers charged with aiding and abetting in the killing of...
Read more

Instead of quelling some of the outrage expressed by demonstrators near the White House who were protesting the killing of George Floyd, President Trump...
Read more

President Donald Trump on Wednesday threatened that Republicans will try to close down social media platforms a day after Twitter, for the first time,...
Read more

British Airways set to sack all flight attendants, then rehire up to 75% of them at reduced pay

British Airways is reportedly preparing to fire all its flight attendants, then rehire up to 75% of them at dramatically reduced pay.   " On 15th...
Read more
- Advertisement -