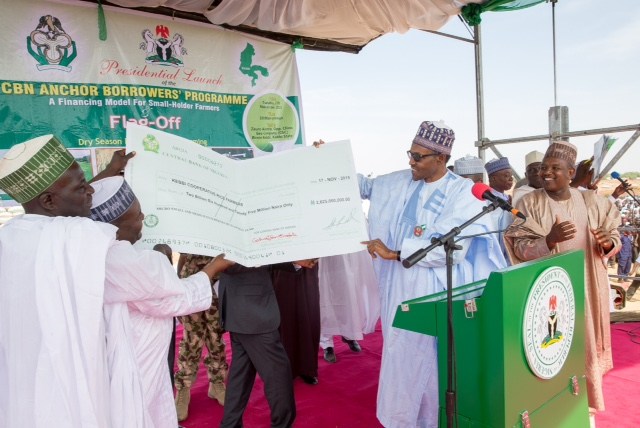 Buhari at Anchor borrowers flag off

They made the announcement during a Gala Night organised by beneficiaries of the government’s Anchor Borrowers Programme held at the State House Conference Center, Abuja.

President of RIFAN, Aminu Goronyo, said with membership of about 12.2 million and with each member donating N100 to the campaign, it will translate to N1.2 billion.

President of FEPSAN, Thomas Etuh, on his part announced that FEPSAN is contributing N570 million to the re-election bid of the president.

They both testified to how the Programme has changed the fortunes of the agriculture sector, which they described as unprecedented empowerment Programme.

Goronyo said apart from the increasing progress in the sector, the President’s policies have also resulted in savings of billions of naira for the country.

According to him, “all these achievements are from your commitments and favorable policies to agriculture.”

Etuh, on his part said N120 billion was saved in two years from fertilizer subsidy.

President Buhari, noted that statistics from the National Bureau of Statistics (NBS) have confirmed that his administration’s policies are yielding results.

He said he inherited “a broken system in the agricultural sector in 2015”.

“Seeing your faces and hearing your stories give me hope. Today, we are on track to achieving an all inclusive economy”.

Meanwhile, President Buhari has directed the Federal Ministry of Agriculture and Rural Development to commence the restocking of all its Strategic Grains Reserves nationwide

He said the directive had become imperative following the completion of a comprehensive survey on damages done to farmers and fishing communities in the riverine areas as a result of flood disaster.

He said the report indicated that over 160,000 farmers and additional 70,000 fishermen were affected by the disaster.

“For about three months the National Food Security Council working with the National Emergency Management Agency conducted comprehensive survey of the farmers, fishermen and livestock owners affected by the flood disaster,” he said.

He thanked the organisers of the event, and assured that the federal government would continue to implement policies and programmes meant to uplift the standard of living of the Nigerian farmers as well as boost food sufficiency in the country.

The Governor of the Central Bank of Nigeria, (CBN), Godwin Emefuele said the Anchor Borrowers programme launched on the November, 17, 2015 has resulted in the saving of $800 million.

He said import bills before the introduction of the programme was as high as N1.4 trillion annually, adding that the programme has been created 2.5 million jobs from rice farming alone.

The CBN governor who described the programme as the most successful anchor programme in Africa, added that “It has raised the standard of our farmers.

“The program is changing the narrative of agricultural investments in Nigeria.

“It has brought the era of food security and sustenance leading to a cut in forex being used for importation of rice and other food items into the country,” he said.

Emefiele stated the programme had received support from stakeholders across the country including state governors.

The CBN governor revealed that the bank was also in partnership with other commodity associations who were working to reduce importation bills and to create jobs. 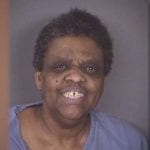 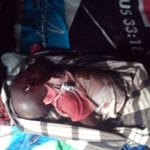