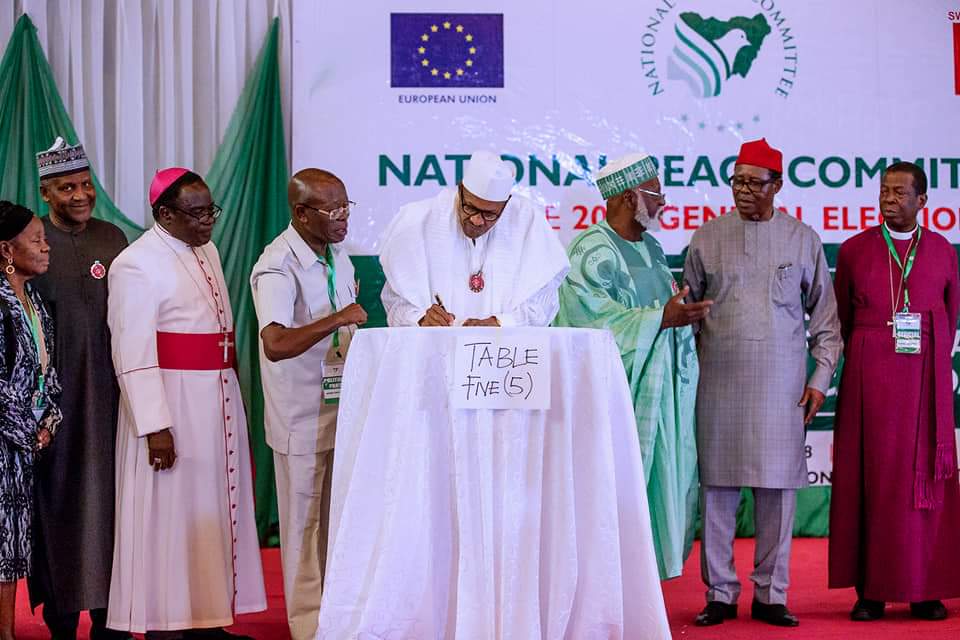 President Muhammadu Buhari at exactly 4:26pm signed the National Peace Accord Agreement ahead of the presidential election scheduled for February, 2019.

President Buhari, accompanied by the National Chairman of the ruling All Progressives Congress (APC),  Adams Oshiomhole to  sign the document.  promise to uphold the highest standard of conduct.

Meanwhile, the Presidential Candiate of the Peoples Democratic Party (PDP), the main opposition party, Atiku Abubakar, has said he did not receive any invitation to be part of Tuesday’s National Peace Accord Agreement.

The Media Adviser to Atiku Abubakar, Paul Ibe said, “I can confirm to you that His Excellency Atiku Abubakar, Presidential candidate of the PDP and former Vice President of Nigeria did not receive any formal invitation to the signing of the Peace Pact.”

The National Peace Committee said at the ceremony that invitation was sent to all 73 presidential candidates out of the 91 registered political parties in the country.

The candidates agrees to: “To run issue-based campaigns at national, state and local government levels. In, this, we pledge to refrain from campaigns that will involve religious incitements, ethnic or tribal profiling, both by ourselves and by all agents in our names.

“To refrain from making or causing to make in our names and that of our party, any public statements, pronouncements, declarations or speeches that have the capacity to incite any form of violence, before, during and after the elections;

“To commit ourselves and political parties to the monitoring of the adherence to this Accord by a National Peace Committee made up of respected statesmen and women, traditional and religious leaders

“To support all institutions of government including INEC and the security agencies to act and be seen to act with impartially.

“To forcefully and publicly speak out against provocative utterances a d oppose all acts of electoral violence whether perpetuated by our supporters and/or opponents.”

Good Election Practices: Buhari Signs Peace Pact.
Share
Subscribe to our newsletter
Sign up here to get the latest news, updates and special offers delivered directly to your inbox.
You can unsubscribe at any time