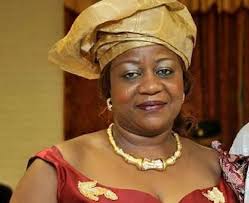 The 2019 race for Nigeria’s presidency is already heating up with a battle over fake news. Hundreds of citizens in the social media are accusing Lauretta Onochie, of defaming Atiku’s campaign with false news stories.

Onochie, posted a picture with 500 Naira notes and taKe away food plastic as what was used to induce Sokoto residents to the PDP North-West flag-off on Monday.

Truth Be Told a Fake news Alert, group revealed that the pictures was taking last year when actress Ruth Eze celebrated the Valentines Day with the less privileged.

Nollywood’s sweetheart, Ruth Eze, celebrated the 2017 Valentine’s Day with the poor in Ajegunle, a suburb of Lagos, after doing same in 2016, said Kemi Filani news.

Sean Ruiz, a reporter with Arizona Light news a US based newspaper said Tuesday that the news was “a proof of dishonesty” and the aide “is profiting from these lies, Ruiz said in an email to Per Second News while trying to confirm the earlier report.

The photos was also spread by many in the Buhari administration amid efforts and campaign by the government to stop the spread of Fake news.

Lauretta was also under attack in June for her description of members of the Christian Association of Nigeria, CAN, as “CAN of worms” on her Twitter account.

The Christian Association of Nigeria (CAN) called on President Muhammadu Buhari to restrain her from alleged use of vulgar abuse and unprintable names against others with absolute recklessness.

Buhari's media aide accused of pushing liesBuhari's media SA accused of spreading fake newsexaggerations and fake news
Share
Subscribe to our newsletter
Sign up here to get the latest news, updates and special offers delivered directly to your inbox.
You can unsubscribe at any time