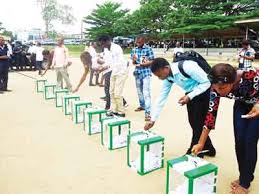 Following the successful Not Too Young To Run campaign, Nigeria’s largest youth-based movement that sought to reduce age limit for running for elected office in Nigeria, YIAGA AFRICA, a citizen-led civil society organisation is pleased to announce that it is providing media support to young Nigerian candidates who are running for political offices in the upcoming 2019 elections, through a Ready To Run Movement.

Tagged ‘The Ready To Run Show’, this platform provides an opportunity for the youth candidates across 36 states of the federation as well as the FCT to showcase their competence, character and capacity as they for public votes irrespective of party affiliation, as political campaigns begin next week.

“Ready To Run is a movement dedicated to inspiring young women and men with competence, character and capacity to run for office and seeks to enhance youth participation in politics by supporting and building the capacity of young people running for office on winning elections and holding office,” Yetunde Bakare, Senior Programme Officer, YIAGA AFRICA Centre for Legislative Engagement (CLE), under which the Ready To Run movement is domiciled, said.

The radio show, as part of the Ready To Run Movement, will air on television and radio and will serve as a platform to discuss issues and challenges youth candidates face as they run for public office in the 2019 general elections. The show will also discuss several issues including voter buying, election violence, accountability, youth candidacy and other related political and election issues as they apply to Nigerian youths.

“With the passage of the Not Too Young To Run Act, YIAGA AFRICA we expect a large participation of youth candidates in the 2019 general elections, therefore we are providing a platform for conversations around youth, politics and elections leading to the upcoming general elections,” Bakare adds.

Tagged ‘The Ready To Run Show’, the campaign will air on television and radio which will serve as a platform to discuss issues and challenges being faced by youth candidates running for office in the 2019 general elections, youth candidacy and other related political and election issues as it applies to Nigerian youths.

The radio the first episode of the show airs on Thursday November 15, 2018, on Nigerian Info 95.1 Abuja and every Thursday from 4-5pm, as a kick off to the national radio show, Bakare said, adding that “it is imperative to note that the ReadyToRun movement does not endorse candidates and remains a non-partisan movement committed to enhancing youth inclusion in the political process of Nigeria.”

2019: YIAGA AFRICA'S Ready To Run radio show provides platform Nigerian youth candidates
Share
Subscribe to our newsletter
Sign up here to get the latest news, updates and special offers delivered directly to your inbox.
You can unsubscribe at any time