Sanwo-Olu is a felon, arrested for spending fake dollars in the US, says Ambode. 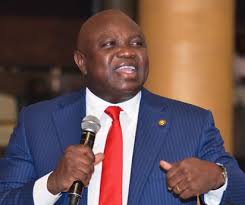 Governor Akinwunmi Ambode on Sunday afternoon said he is ready for a free and fair party primary elections on Monday.

In a press conference in Lagos the governor said he is under no illusion about the slog ahead in the APC primary for governor,  but said ” We shall overcome.”

He said Sanwo-Olu is not a fit and proper candidate for the position of Lagos governor.

“He has been arrested for spending fake US dollars in an American night club. He lacks competency and health wise, he has gone through mental rehabilitation.

The governor disclosed that Sanwo-Olu served time in US prisons in connection with a string of counterfeit bill-passing incidents in the country.

Sep 28, 2022
arrested for spending fake dollars in the USSanwo-Olu is a felonsays Ambode.
Share
Subscribe to our newsletter
Sign up here to get the latest news, updates and special offers delivered directly to your inbox.
You can unsubscribe at any time

I won’t get into war of words with Ambode, says Sanwo-Olu