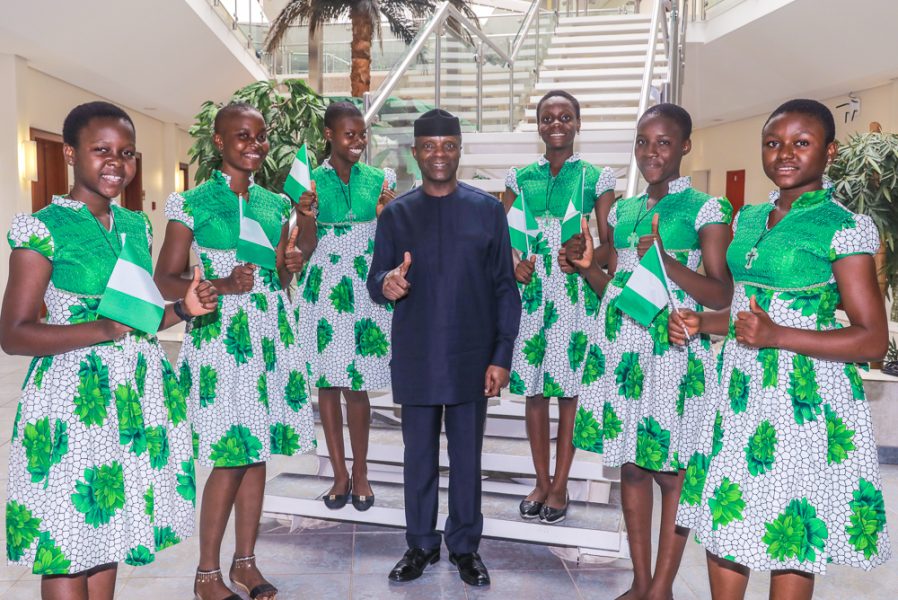 Vice President Yemi Osinbajo on Thursday received the Nigerian girls who won the World Technovation Challenge in the Silicon Valley in San Francisco, US, in August.

Their pitch at the contest was FD-Detector Application, which they developed to curb fake drugs.

The team, mentored by Uchenna Onwuamaegbu, defeated representatives of other countries including the USA, Spain, Turkey, Uzbekistan and China to win the gold medal at the contest. 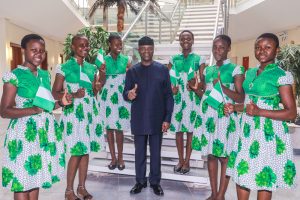 They were accompanied by Deputy Governor of Anambra State, Nkem Okeke, Commissioner for Education, Prof. Kate Omenugha, and the Principal of the Regina Pacies Secondary School Onitsha.

In his remarks, Osinbajo said the federal government would be part of the success story and would be talking to the government of Anambra State about what could be done to support the project.

He said government would also collaborate with the Edufun Technik Stem Centre; whose Managing Director, Uchenna Onwuamaegbu, mentored the girls in developing the application.

The Vice President said some of the areas of education that government was looking at are the pre-school and primary school that would take into cognizance technological development.

“In our new curriculum, what we are looking at is a variant of STEM.  So we are looking at Science, Technology, Engineering, Arts and Maths, STEAM. We have already drawn up an indicative curriculum and of course the focus is technology because technology is the leveler and it will bridge not a few divides, not just the gender gap, but practically everything, including the knowledge gap between developing countries and developed countries.”

“For us, this is existential.  We have no choice but to ensure that young people, especially from pre-primary to primary school, are able to use technology in innovation and creative ways.

“The world has changed.  The entire system of education has challenge because certainly, we cannot prepare not just for the 21st Century but even the next five years without serious investment in technology.”

Also speaking the Deputy Governor of Anambra State, Okeke, said the Anambra State government has continued to invest in education in view of its critical importance to development.

Osinbajo receives Nigerian girls that won 2018 World Technovation Pitch
Share
Subscribe to our newsletter
Sign up here to get the latest news, updates and special offers delivered directly to your inbox.
You can unsubscribe at any time