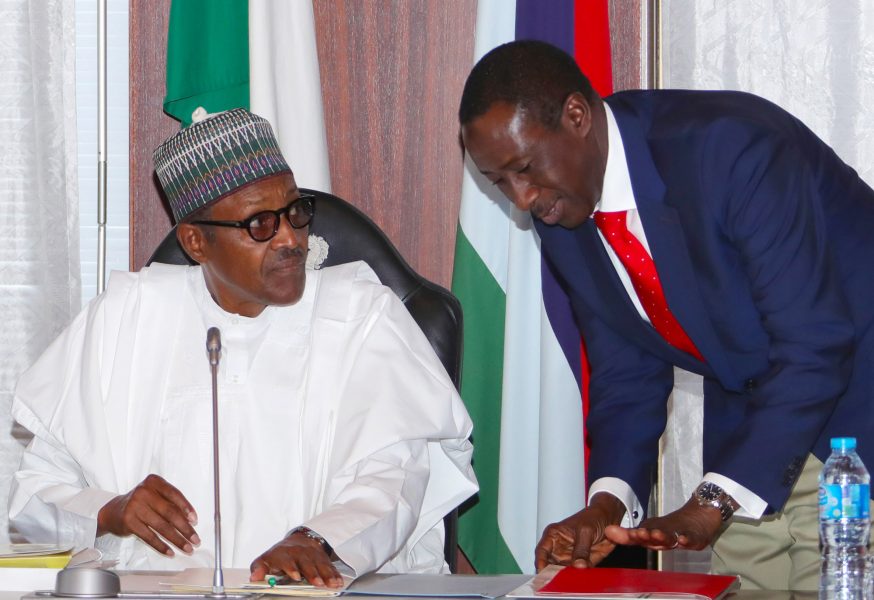 President Muhammadu Buhari Monday has directed security chiefs in the country to step up their game  and rapidly curtail the security situation in the country.

The order came just as the Federal Government described security report from the North East as worrisome, after a critical review Monday.

He gave the directive at the two and half hours meeting he had with­ the heads of the security agencies  in the country at the Presidential Vill­a, Abuja.

At least 19 people were killed when terrorists attacked a village in northeast Nigeria in the early hours of Sunday, Reuters reports.

The attack occurred in the village of Mailari in the Guzamala region of Borno state at around 2 a.m of Sunday, August 19, 2018. Reuters quoted a survivor, Umar, as saying he had counted 19 dead people, including his younger brother.

An aid worker at a camp who received some survivors, and who declined to be identified, put the death toll at 63, the story says.

The meeting, which started around 11.30am and ended at 2pm in the State House is President Buhari’s first major­ assignment in the Presidential villa  since he return to the country  last Saturday after a 10-day working vacation in London, United Kingdom.

Speaking to State House Correspondents at the end of the meeting, Minister of Defence, Mansur Dan-Alli, said the meeting was a normal routine security briefing with Mr President, and an update of August 2nd meeting before his departure to London for his vacation.

On the decision of the meeting, the minister said, “The decision that has been taken is that we have seen that there is a lot of improvement in the security situation in the country more especially in Zamfara and Benue state and in the Niger Delta.

Chief of Defence Staff, Gen. Gabriel Olonisakin, on his part said President Buhari has  security agencies to up their game to ensure that the nation is safe and people go about their daily activities in a very safe manner.

He said, “We just had two and half hours meeting with the President and Commander in Chief. We reviewed the security situation across the country in all the geopolitical zones and of course we made all our comments, especially the new operations in Benue, Zamfara, Taraba ‘Operation Whirl Stroke’ and Operation Saradaji.

“All the operations were reviewed and all the issues concerning the operations were dealt with. And he directed that we should continue to step up our game to ensure that the nation is safe and people go about their daily activities in a very safe manner.”

Seiyefa was appointed acting DG DSS of August 7th, after Lawal Daura was sacked Yemi Osinbajo (then acting President), for unauthorized invasion of the National Assembly and was promptly arrested right inside the presidential by men of the Nigerian Police Force.