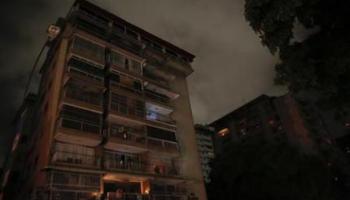 A man stands at the balcony of his apartment as he waits for the power to return after a blackout in Caracas December 2, 2013.REUTERS/Carlos Garcia Rawlins

Nigerians in the country’s most populous city, Lagos state, are likely to experience an extended period of darkness due to an ongoing spat between members of the National Union of Electricity Employees (NUEE) and electricity provider Ikeja Electric Plc (IE) over an alleged sack of more 40 people from the electricity company.

Due to the spat, commercial and financial businesses in the area might experience loss in revenue as the NUEE allegedly forcibly shut down operations at the offices by resisting access to IE personnel and customers who have attempted to gain access to the offices, according to the company’s spokesperson.

The disruption of service at the electricity company is seen by the Head of Corporate Communications, Felix Ofulue, as crippling socio-economic activities of over a million households and plunging the “country’s commercial nerve center into darkness.”

“When NUEE chooses to cripple socio-economic activities of over a million households, for issues that can be resolved through dialogue, one then wonders if the motives are as selfless as they claim.

“Our employees in Alausa Injection Substation were chased out of the facility by the union and they had to shut down 9 feeders that supply power to Ikeja and its environs on safety grounds. This has resulted in an immediate blackout for at least 3000 customers,”  Head of Corporate Communications, Felix Ofulue, told reporters.

According to him, although the company did disengage some staff from the company, it promoted about 300 employees, including members of the respective unions in the organization, last week just as it recruited more than 500 new employees in the past one year.