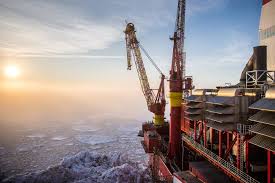 While most of the sanction-bypassing oil trade with North Korea is thought to be originating from China, oil sales from Russia to Kim Jong-un’s regime may be much larger than official figures suggest, as shell companies have been set up for illicit oil flows to Pyongyang, the Asan Institute for Policy Studies said in a recent report.

Under the latest United Nations Security Council  sanctions regarding oil sales to North Korea from December 2017, North Korea is allowed to import a maximum aggregate amount of 500,000 barrels of all refined oil products for 12 months beginning on January 1, 2018. The sanctions also introduced a limit of 4 million barrels—or 525,000 tons—per a twelve-month period as of 22 December 2017 for the supply, sale, or transfer of crude oil to North Korea.

According to the report by the South Korea-based institute, more recently, “oil tankers under a number of different national flags were spotted engaging in ship-to-ship transfer of oil, in a clear bid to avoid sanctions enforcement.”

Russian tankers have been involved in several of these transfers, says the report.

The analysis found that in the three years between 2015 and 2017, shell companies and one North Korean state enterprise bought 622,878 tons of Russian oil worth US$238 million.