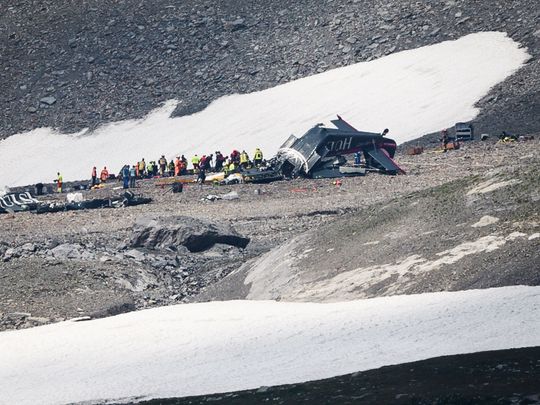 A record heatwave across Europe that sent temperatures in Switzerland as high as 94 may have caused the crash of a vintage propeller plane that slammed into the side of a Swiss mountain Saturday, killing all 20 onboard.

The plane went straight down, crashing almost vertically into the western flank of the Piz Segnas mountain at 8,300 feet at about 5:00 pm local time Saturday. When it crashed it was going at a high rate of speed, officials said.

Photos released by state police in the area showed the crumpled wreckage of the plane, with only the tail, twisted over and upside down, still somewhat intact.

The 1939 Junkers Ju 52, of a type nicknamed Iron Annie, was returning from the resort town of Locarno in southern Switzerland.

The plane was about 50 minutes into its flight when it crashed. Authorities said no emergency call was made in the moments before the plunge.

“High temperatures can affect the performance of an aircraft,” Daniel Knecht from the Swiss safety investigation agency said in a press conference held Sunday near the crash site in the Alpine resort of Flims, Switzerland.

Swiss Crash
Share
Subscribe to our newsletter
Sign up here to get the latest news, updates and special offers delivered directly to your inbox.
You can unsubscribe at any time