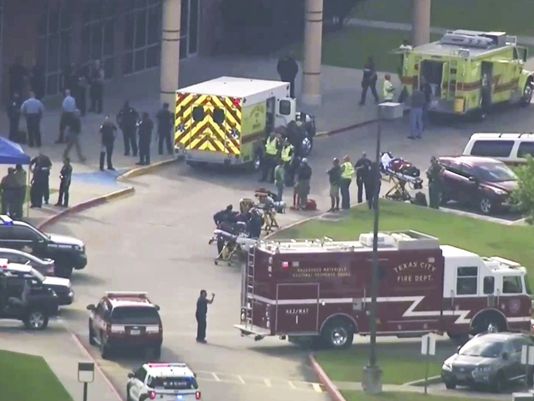 At least 8 people are dead after a shooting at a Texas high school Friday, according to reports in the US media.

Houston County Sheriff Ed Gonzalez tweeted that one person was in custody and a second person was detained. An injured officer is also being treated, Gonzalez said.

Three people from the scene at Santa Fe High School have been admitted to the University of Texas Medical Branch, according to spokesman Christopher Smith Gonzalez.

Two of the patients are adults and one is a minor. One of the adults is in surgery and the other is being evaluated in the emergency room, Gonzalez said. The minor was also admitted.

The gunman opened fire inside the school at about 7:45 a.m., around the time school was about to start for the day, according to Joe Giusti, a Galveston County commissioner. He said the injured officer worked for the Santa Fe school district as a school resource officer. The gunman was uninjured, he said.

President Trump commented on the shooting in a tweet on Friday.

“Early reports not looking good,” he said. “God bless all!”