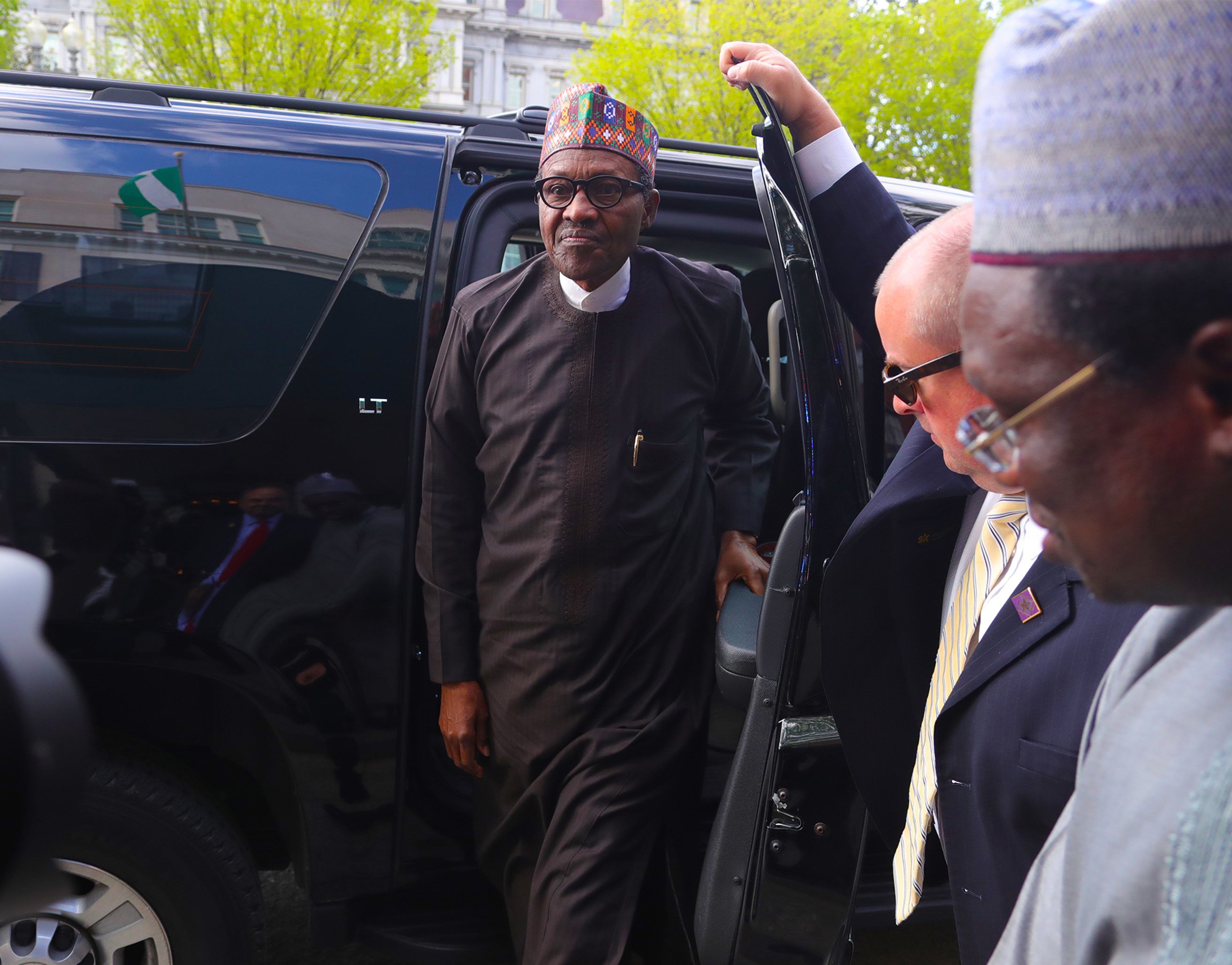 PRESIDENT BUHARI ARRIVED BLAIR HOUSE IN USA 0A. President Muhammadu Buhari Motocade on arrival at the Blair House in readiness for a bilateral meeting with the United State President Donal Trump at the White House. PHOTO; SUNDAY AGHAEZE. APRIL 29 2018

Nigeria’s president is trying to prove he can get from Washington what his predecessor couldn’t, but it might not be enough to get him re-elected.

The septuagenarian presidents of Nigeria and the United States held a much-publicized meeting at the White House on April 30. The two countries are trying to patch things up after their biggest ever row. During the tenure of former Nigerian President Goodluck Jonathan, relations deteriorated to their lowest level ever, culminating with the U.S. refusal to sell Cobra attack helicopters to Nigeria in 2015 to aid the country’s fight against the terrorist group Boko Haram. The spat, which arose due to U.S. concerns about alleged human rights abuses by the Nigerian army, prompted Nigerian accusations that the United States was a false friend that had failed to help Nigeria in its moment of crisis.

But personal priorities have driven the most recent round of diplomacy. For Nigeria’s embattled president, Muhammadu Buhari, it was an opportunity to escape domestic criticism and pressure and demonstrate to voters that he has kept Nigeria’s partnership with the United States intact. For U.S. President Donald Trump, meeting with the president of Africa’s most populous country was an excellent chance for him to contain the furor after his infamous comments referring to African nations as “shithole countries” and to counter accusations that he does not care about the continent.

Buhari defeated Jonathan in the 2015 presidential election based on his image as a military “ironman” who could simultaneously fight corruption and security threats. But Buhari’s claim in December 2015 that “technically we have won the war” against Boko Haram has repeatedly come back to haunt him.

Nearly two and a half years after Buhari’s “mission accomplished” moment, the Islamist terrorist group still carries out suicide bombings, ambushes army convoys, and kidnaps schoolgirls. The threat from Boko Haram and other sources of communal violence has become so widespread that the Nigerian chief of army staff, Lt. Gen. Tukur Yusuf Buratai, admitted that the army is deployed on various security operations in 32 of Nigeria’s 36 states.

Buhari’s popularity has plummeted, and his critics have gotten tougher. In January, former President Olusegun Obasanjo wrote a public letter in which he urged Buhari to “dismount from the horse” and retire from office. With Nigeria’s next presidential election less than a year away, the vultures are circling around Buhari. The biggest danger to Buhari’s re-election bid may ironically lie within his own party.

Former Vice President Atiku Abubakar, a key financier of Buhari’s 2015 campaign, has defected to the opposition People’s Democratic Party. Additionally, both Senate President Bukola Saraki and House Speaker Yakubu Dogara have bad blood with the leadership of Buhari’s ruling All Progressives Congress (APC) party. Many APC members view Saraki and Dogara as a fifth column inside the party. Opponents have also questioned whether a man of Buhari’s age (he is 75) and with his poor health record is strong enough to be the president of a tumultuous country like Nigeria. On his way back from Washington, he made a “technical stopover” in London and met with his medical doctor there. Last year, Buhari spent three months abroad in London for treatment for an illness he has refused to disclose.

Buhari needs a political boost if he is going to have a shot at re-election. The meeting with Trump, and the United States’ recent decision to sell Super Tucano fighter jets to Nigeria, allows Buhari to show voters at home that he has repaired a broken relationship

and that his own skills have achieved deals with Washington that his predecessor couldn’t produce.

Yet Buhari needs the Tucano deal more than his country does. This deal amounts to toys for the boys, bolstering Buhari’s image, rather than being a gamechanger in the war against Boko Haram. Indeed, Nigeria is getting the right equipment but at the wrong time.

Tucano jets would have had more impact four years ago, when Boko Haram was attacking and occupying Nigerian territory like a conventional army, rather than today, when its preferred method of attack is to send little girls into mosques and crowded markets on suicide bombing missions. The Tucanos will not stop suicide bombings, nor will they stop the clashes between farmers and herdsmen that are Nigeria’s next security headache.

Apart from the personal victories, the reset in U.S.-Nigerian relations also demonstrates how much the relationship between the two nations has changed over the past decade. Oil was the traditional sweetener of choice in Nigeria’s business deals. Nigeria used to export 1.31 million barrels of crude oil per day to the United States in 2006. By February of this year, its oil exports to the United States had plummeted by 71 percent to just 369,000 barrels per day as America has become reliant on its own oil production and less dependent on oil imports from abroad. Nigerian Oil Minister Ibe Kachikwu publicly admitted that the era when the United States was a primary export market for Nigeria “is gone.”

Although their relationship is no longer about oil, the United States and Nigeria still need each other.

Nigeria has Africa’s largest economy and population. Trump wants Nigeria to remove trade barriers and give U.S. companies greater access to Nigeria’s large, young population of almost 200 million, many of whom love foreign goods and more than half of whom are under 30. While the United States erected red tape around deals thanks to the Nigerian army’s alleged human rights abuses, Chinese companies — with no such scruples — have been busy investing and building roads and train lines in Nigeria.

Members of Buhari’s delegation met with large U.S. companies, including Boeing and General Electric, during the Washington trip. Boeing is interested in Nigeria’s plans to resuscitate its national airline, and GE is part of a consortium that agreed to a $2 billion railway development project in Nigeria. These meetings are a chance for U.S. companies to avoid ceding further ground to China.

But the relationship, always unsteady, is not out of the woods. And even Buhari’s much-touted arms deal is causing friction. Nigeria’s minister of defense, retired Army Brig. Gen. Mansur Dan-Ali, protested the stringent conditions that Washington attached to the sale of the Tucano jets. The jets will not be delivered until 2020, and Nigerian officers will be barred from maintaining them, examining their architecture, or from being trained by U.S. personnel.

Dan-Ali was so outraged by these conditions that he vowed not to pay for the jets unless the U.S. conditions are relaxed. The inexplicably high cost of the Tucano jets (almost $500 million), and the fact that Buhari agreed to their purchase without approval from the National Assembly, also led some senators to call for his impeachment. With the deal under such close scrutiny, what seemed like a much-needed Band-Aid for U.S.-Nigerian relations could prove painful if it gets torn off.