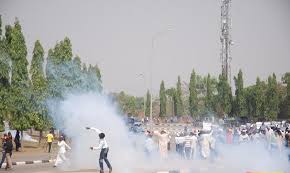 Police arrested over 100 people on Monday in Abuja for participating in a violent protests by members of Islamic Movement of Nigeria (IMN.)

Police said the protesters were arrested for attacking officers, “blocking roads and causing public disturbances” in the federal capital territory.

The Shi’ites are protesting for the release of Ibrahim El-Zakzaky, leader of the group, who has been in custody of the Department of State Services (DSS) for two years.