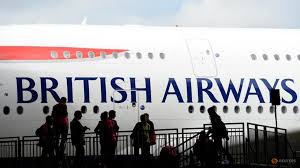 British Airways is facing another crew scandal barely 7 months after a stewardess made shocking racist rant about Nigerians.

The airline crew alleged  that male Nigerian passengers would need extra leg room because of the size of their penises.

The airline has been caught in new air hostess alcohol scandal as Patricia Casey, 51, a stewardess, admitted to drinking while on the job after she reportedly took eight shots of vodka while working a 13-hour flight from Singapore to the U.K.

A curious passenger smelled the alcohol on her breath, prompting her arrest at London Heathrow’s Terminal 5  airport when the plane landed.

Casey at first lied and said “she had not had any food or drink” while working. However, after she was taken to a private room, the flight attendant admitted to police that “she had been very silly” and had drunk four miniature bottles of vodka during the course of the flight.

Authorities tested Casey and found she had 201 milligrams of alcohol in 100 milliliter of blood, or 10 times the limit of 20 milligrams allowed for flight crews.

The flight attendant of 21 years said she had been self-medicating with alcohol during her divorce from her husband of 18 years.

She was convicted of one count of performing an aviation function while impaired by drink and was fired and fined.

British airways
Share
Subscribe to our newsletter
Sign up here to get the latest news, updates and special offers delivered directly to your inbox.
You can unsubscribe at any time

Limit Alcohol To One Drink a Day – Study