From Washington to every state in America, anti-gun ‘March for our lives rallies begin 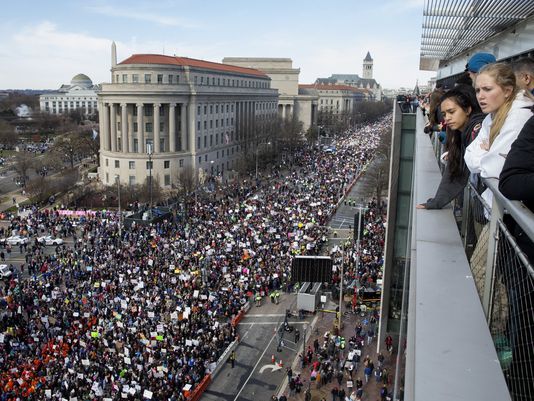 Hundreds of thousands of students — and their supporters — took to the streets in Washington, D.C., and around the United States on Saturday to make a powerful statement against gun violence at March for Our Lives rallies.

Billed as the young people’s response to the Parkland, Florida school shootings and a cry for further gun restrictions from legislators, the events have been assisted in the background by a sophisticated network of established adult activists. The events received financial donations of at least $500,000 each from such donors as George and Amal Clooney, Steven Spielberg and Kate Capshaw, Jeffrey Katzenberg, and Oprah Winfrey, among publicized contributors.

The march is part of a surge of political activism that has transformed the nation’s entrenched debate over gun violence. It was organized by students who survived the mass shooting last month at Marjory Stoneman Douglas High School in Parkland, Fla., who hope to succeed where many adults have failed: In forcing Congress to pass a comprehensive gun-control bill that will improve school safety.

The White House issued a statement Saturday praising the participants in the marches, though they are calling for tougher gun-control measures than President Trump supports.

“We applaud the many courageous young Americans exercising their First Amendment rights today,” White House spokeswoman Lindsay Walters said in the statement, in which she added that “keeping our children safe is a stop priority of the President’s.”

The U.S president himself was in Florida at Trump International Golf Club, located about 35 miles from Parkland.

Many crowded into downtown Washington,DC, early Saturday morning to stake out places at what promises to be less a march than a standing-room-only rally, with 20 speakers — all of them under 18 years old — and performances by celebrities including Ariana Grande, Common, Miley Cyrus, Jennifer Hudson, Vic Mensa, Lin-Manuel Miranda and Ben Platt.

The crowd gathered along Pennsylvania Ave NW from 3rd Street NW to 12th Street NW. The stage, located at 3rd and Constitution Streets, NW, served as the hub for the day’s program, which began at noon Eastern Time,  6PM Nigerian Time.

Anti-gun
Share
Subscribe to our newsletter
Sign up here to get the latest news, updates and special offers delivered directly to your inbox.
You can unsubscribe at any time

The Day in Pictures: The Osinbajo’s at the Wedding Reception of Fatima Dangote & Jamil Abubakar in Lagos