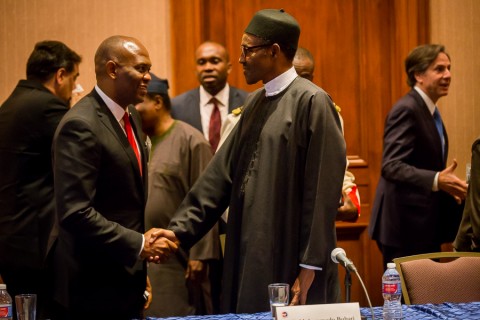 The President commends Elumelu’s diligence, versatility and selflessness in championing the economic philosophy of “Africapitalism”, which calls to action the need to grow businesses that cater for African interests, support governments and bottom-up development within the continent, by discouraging long term dependence on donor countries and philanthropic organisations.

President Buhari joins the United Bank of Africa, the Tony Elumelu Foundation, the Elumelu family and all professional colleagues of the economist, consummate banker and successful entrepreneur, whose pacesetting antecedents continue to inspire both the young and old on the power of ideas, big dreams and hard work, said the birthday message released by spokesperson Femi Adesina.

As Elumelu turns 55 years, President Buhari believes the entrepreneur’s greatest investment has been in the development of people and communities, clearly evident in the Tony Elumelu Foundation which started with scholarships and fellowships, and now trains a new generation of business leaders across the continent.

President Buhari prays that the almighty God will grant Elumelu longer life, more ideas and renewed vigour to pursue his dream of making life better for others. Elumelu who is the 2017 Philanthropist of the year, was born on March 22, 1963, in the city of Jos, Plateau state.

He hails from Onicha-Ukwu in Aniocha North Local Government Area of Delta state in the Niger-Delta region.

Chairman governing board of the Niger Delta Development Commission, NDDC, Senator Victor Ndoma-Egba, recently said that the Entrepreneur and business man is a gift to Africa.

“He is a Niger-Delta son and we are proud of his outstanding achievements and dedication towards helping the society, he said.

Mr Tony Elumelu is the founder of TEF, a foundation founded in 2010 to spur the continent’s development through entrepreneurship and competitiveness.

Elumelu
Share
Subscribe to our newsletter
Sign up here to get the latest news, updates and special offers delivered directly to your inbox.
You can unsubscribe at any time