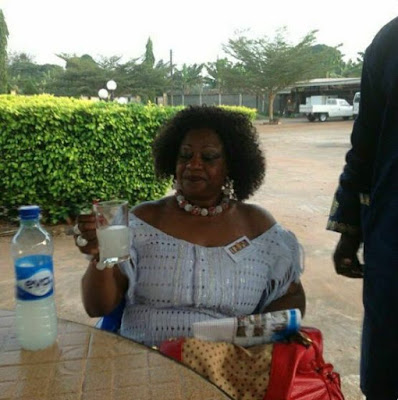 The Personal Assistant to President Muhammadu Buhari on Social Media, Lauretta Onochie Wednesday launched a scathing Facebook attack on former President Goodluck Jonathan over his denial of withdrawing N153 billion  ahead of the 2015 presidential elections, as alleged by Vice President Yemi Osinbajo.

Osinbajo had on Monday alleged that N100bn and $289m in cash were released a few weeks to the 2015 elections.

Onochie who described Osinbajo as a man of honour and integrity, said he had no reason to lie against Jonathan who she accused of holding the record of presiding over “the biggest national heist in world history.”

She wrote, “Who is lying? Definitely not our Vice President Yemi Osinbajo.

“I think ex-President Jonathan has run out of good luck. Government is no longer run on propaganda, assumptions, cheek in tongue and political correctness.

“Facts. That’s how we roll. That’s what Nigerians want. President Muhammadu Buhari always reminds us never to lie to his people. By his people, he means Nigerians .

“President Jonathan needs to sober up, think back to 2015. If he can’t remember, I’ll help him.

“He was facing humiliation at the polls; he thought money could buy him more votes; not his money, but our money.

“He asked the then NSA, Col. Sambo Dasuki, to become a bank and a clearing house. The smokescreen was security, to buy arms. But it was for buying more votes.

“Mrs. Ngozi Okonjo-Iweala was alarmed when Col. Dasuki approached her for the funds. She did a memo to President Goodluck Jonathan on the issue.

“President Jonathan gave approval to Mrs. Ngozi Okonjo-Iweala to play ball with Col. Dasuki. Elections were postponed. The money was distributed and recipients hid them in cupboards. Jonathan lost the election!

The letter below was titled “Re: Request by NSA for transfer of funds.” 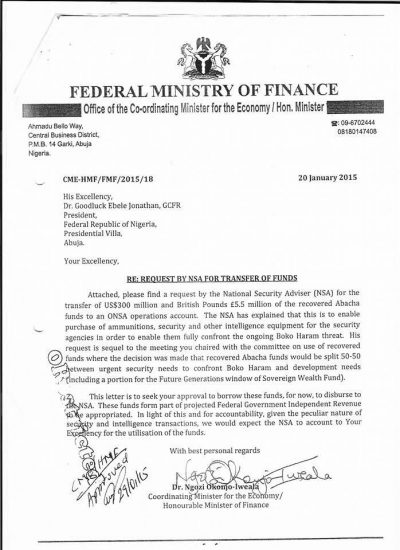 Critics of the administration say President Buhari is lacking the grace, skill, empathy,work ethic, knowledge, tact, and fitness for the job, all of which former President Goodluck Jonathan possessed in depth, hence the reason most administration officials display their envy by blaming Jonathan for everything.

President Buhari is obsessed with his predecessor, according to a number of pundits who believe many of the ruling APC policies are all about “blowing the former president’s legacy.”

Mr. Amaechi said it is time for administration officials to concentrate on delivering good policies to the citizens rather than dragging the former president for Nigeria’s woes.

“I agree with those who said we should stop criticising the last government and that we should do our own,” Ameachi was quoted as saying in his office.