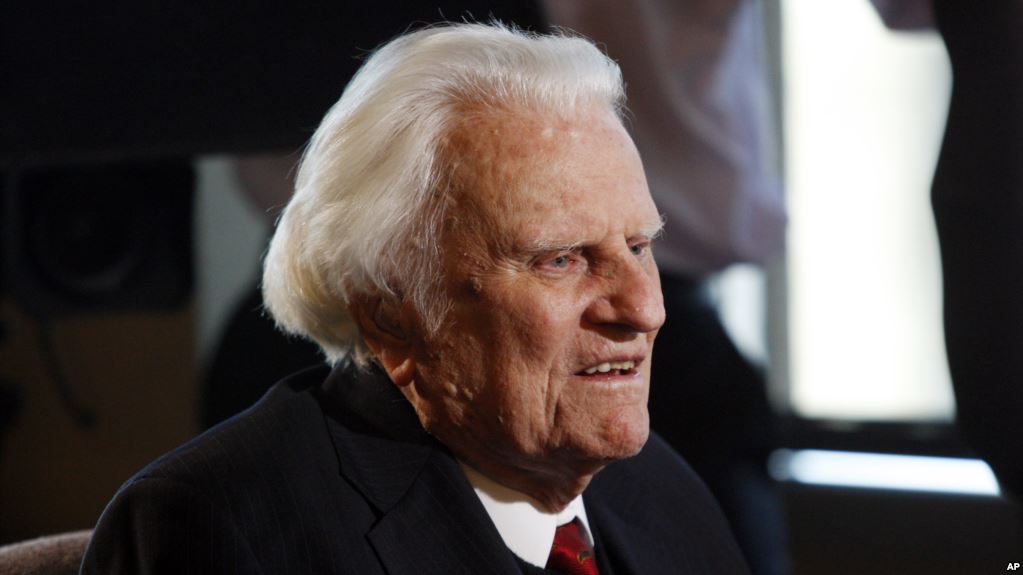 Rev Billy Graham, whose sermons were broadcast in churches around the world, died Wednesday morning at his home in Montreat, North Carolina, his nonprofit organization announced. He was 99.

In the summer of 2005, Graham preached at what he called his “Final Crusade.”

“When I touch the podium, I can feel a new strength and a new power come and it’s a thrilling thing for me to preach the gospel at this age,” Graham said.

The three-day event in New York City was the culmination of a lifetime of evangelism — seven decades of spreading the gospel to more than 200 million people in 185 countries around the world.

Graham once said: “Jesus Christ, the son of God, has an answer to every problem that you face!”

Raised in the fundamentalist faith of his native North Carolina, Graham dedicated his life to Christ when he was 16, and was ordained a Baptist minister in 1939. He created his own brand of populist evangelism. His “crusades,” as he called them, were soon attracting millions in person and later through television.

“We are united, and are ready to march under the banner of almighty God, taking as our slogan that which we have on our coins, ‘In God We Trust,'” Graham once said.

Before long, Graham set his sights on the rest of the world, and took his “crusades” to Europe, Africa, India, the Far East. A staunch anti-communist, one of his cherished ambitions was to bring the gospel message to the officially atheist countries behind the Iron Curtain.

“The GREAT Billy Graham is dead,” Mr. Trump said. “There was nobody like him! He will be missed by Christians and all religions. A very special man.”

Billy Graham
Share
Subscribe to our newsletter
Sign up here to get the latest news, updates and special offers delivered directly to your inbox.
You can unsubscribe at any time

Tinubu and the Hobson’s choice