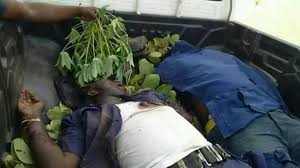 Herdsmen carried out a devastating ambush on a convoy of Nigeria Security and Civil Defence Corps, NSCDC, deep inside Uvir in Guma local government area of Benue state.

At least two officers were killed in the attack, which occurred on Monday, marking the first NSCDC casualties in herdsmen attacks.

The officers were deployed to the troubled area in the wake of the renewed herdsmen attack that killed over 70 villagers last month.

Violent conflicts between nomadic herdsmen from the north and sedentary agrarian communities in the central and southern region of the country have escalated in recent times and are spreading southward, threatening the country’s security and stability.