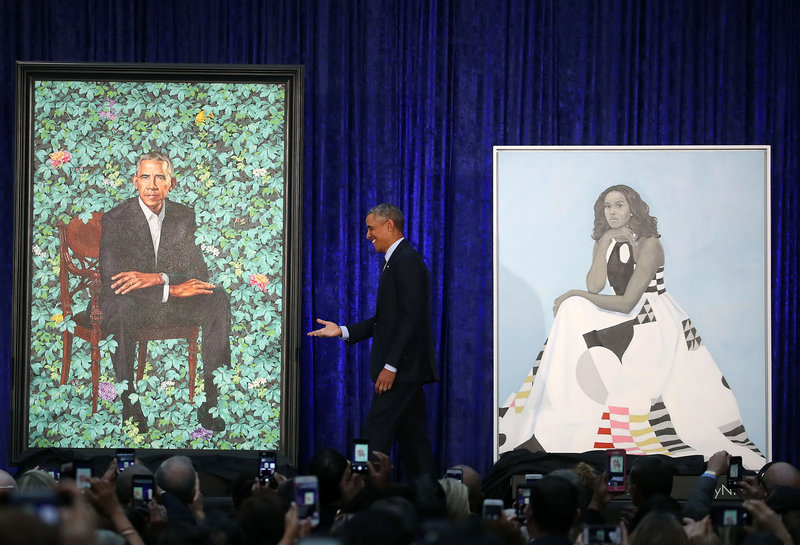 Barack and Michelle Obama were at the Smithsonian National Portrait Gallery Monday in D.C. for the unveiling of their portraits.

The former President had high praise for Amy Sherald and thanked her for “capturing the hotness of the woman I love.” Smooth. 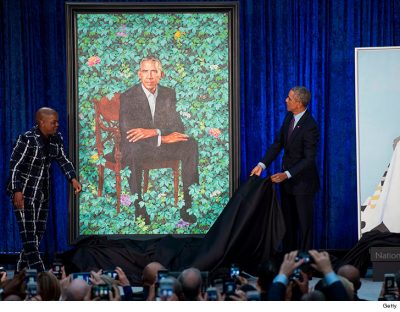 Kehinde Wiley painted Barack Obama sitting in a chair, elbows in his knees, leaning forward with an intense expression. The background, typical of a Wiley painting, is a riotous pattern of intense greens.

Kehinde Wiley was born in Los Angeles in 1977.  His father is Yoruba from Nigeria and his mother is African-American. As a child, his mother supported his interest in art and enrolled him in after-school art classes. At the age of 12, he spent a short time at an art school in Russia.

Wiley did not grow up with his father, and at the age of 20 traveled to Nigeria to explore his roots and meet him. Wiley earned his BFA from the San Francisco Art Institute in 1999 and his MFA from Yale University, School of Art in 2001.

In October 2011, Wiley received the Artist of the Year Award from the New York City Art Teachers Association/ United Federation of Teachers.

Dozens of friends and supporters, including former Vice President Joseph Biden, Attorney General Eric Holder and Senior Adviser David Axelrod, gathered in the atrium of the gallery for the ceremony. Among those attending were Steven Spielberg and Kate Capshaw, Tom Hanks and Rita Wilson, and Gayle King.

The seven-foot portrait features a background of flowers, including chrysanthemums, the official flower of the Obamas’ hometown of Chicago; jasmine, for Hawaii, where Obama spent his childhood; and African blue lilies to reference his late Kenyan father.

Amy Sherald, a Baltimore-based artist, painted Michelle Obama sitting in a floor-length gown, chin on her hand, looking directly at the viewer with a calm, level gaze. 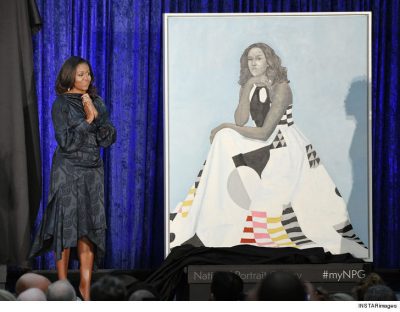 The paintings, like the presidency they honor, are a historic first. Wiley and Sherald — both already famous for their portraits of black Americans — are the first black painters to receive a presidential portrait commission from the museum.