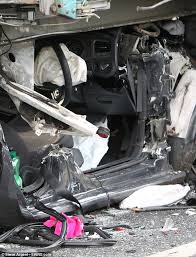 Initial indications are saying inattention is to blame in a fatal accident in Akure, Ondo state.  The devastating wreck occurred Monday killing the head teacher of LA Primary School, Igbatoro/Familugba in Akure North Council Area of Ondo state, Pastor Oluwajuwon Adebayo and his Assistant, Pastor Sunday Ajenifuja by a negligent trailer driver on their way to School.

Though their school, L.A primary school is located in Akure North Council area, the road from Akure is not motorable which is why the alternative route is always through Owo-Ifon-Okeluse linking Familugba/Igbatoro.

The duo who are the only teachers in the school had set out for the day’s work when they met their untimely death around 11am when the trailer rammed into them when he swerved from his lane.

“This is driver inattention at its worst,” said a witness.

The accident occurred when the driver wasn’t paying full attention to the road because he was fatigued or distracted, he said.

Ondo state Police Command Spokesperson, Femi Joseph who confirmed that incident described it as a case of ‘carelessness, reckless and dangerous driving by the trailer driver whom he identified as Juwon Ariyibi, a staff of Cobil Limited, Porthacourt.

Joseph said Ariyibi is already in police custody and would be charged to court upon completion of investigation.

trailer
Share
Subscribe to our newsletter
Sign up here to get the latest news, updates and special offers delivered directly to your inbox.
You can unsubscribe at any time