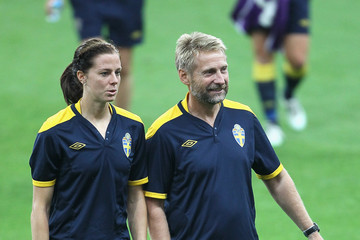 “The NFF decided to go for a coach of the calibre of Thomas Dennerby for three reasons,”  said Dikko Shehu, NFF vice-president.

“To sustain and enhance the Super Falcons’ dominance on the African scene.

“To take the Falcons and other women’s teams to the next level of challenging for laurels at global competitions like the Olympics and the World Cup.

The 58-year-old has signed a deal until 2020 and replaces Florence Omagbemi, as coach of the country’s female football team.

Dennerby managed Sweden’s women’s team from 2005-2012, guiding the side to third place at the 2011 Women’s World Cup in Germany.

His appointment comes after the NFF appointed Randy Waldrum in October only for the American to turn down the role.

Waldrum failed to agree terms with the NFF, who had announced his appointment in October 2017.

He will be assisted for his new role by compatriot Jorgen Petersson, 42.