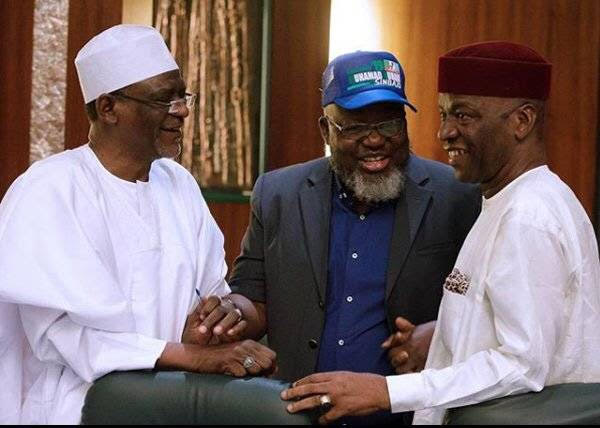 Twenty four hours after former President Olusegun Obasanjo in an 18 page statement, said that with each day president Buhari offers fresh proof that he is failing the office that Nigerians entrusted to him, the Minister of Communications, Adebayo Shittu, on Wednesday attended the weekly Federal Executive Council meeting with a bag full of President Muhammadu Buhari’s re-election campaign caps.

The inscription on the cap read, “Continuity ’19: Muhammadu Buhari/Osinbajo”.

Adebayo, who is also the South West Campaign Coordinator distributed to the ministers in attendance.

Shittu who is aspiring to contest the governorship election on the platform of the All Progressives Congress, APC, in Oyo State wore his own cap, while his other colleagues in the cabinet were expected to put on theirs.

Shortly before the commencement of the meeting presided over by the President at the Council Chambers of the Presidential Villa, Abuja, the minister handed over the bag to the council’s secretariat staff members.

The workers are the ones saddled with the responsibility of distributing council documents and other items to members.

Shittu, who was decked in a pair of suit, adorned his own blue cap.

Photojournalists ensured that they captured him while exchanging pleasantries with some of his colleagues.

The caps he distributed at the council meeting are said to be the souvenirs he produced for the Ibadan event.

The Minister that is having running battles with his state governor, Abiola Ajimobi is not leaving any stone unturned to ensure that President Buhari is re-elected.