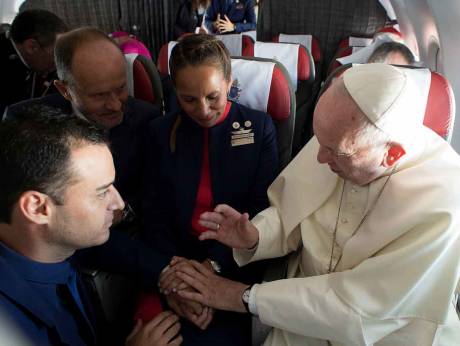 ON BOARD THE PAPAL PLANE: Pope Francis married a couple of airline employees aboard the papal plane as it flew over Chile on the third day of his South American trip.

Francis formally joined in matrimony 41-year-old Carlos Ciuffardi and Paula Podest, 39, who have two children and are both flight attendants.

The Chilean couple married in a civil ceremony in 2010 but were never formally wed in the eyes of the Catholic Church.

Pope Francis (R) talking to Latam airline flight attendants Paula Podest (C) and Carlos Ciuffardi on the plane, after marrying them during the flight between Santiago and the northern city of Iquique. AFP

The brief ceremony took place at an altitude of 36,000 feet (11,000 meters) on a two-hour flight taking the pope from the capital Santiago to the northern city of Iquique.

Aug 10, 2022
At the end of the ceremony, which took place out of view of journalists travelling with the pope, the two Latam employees co-signed a handwritten marriage certificate which bore the pope’s simple signature “Francis.”

According to the Vatican, the couple were unable to have a religious ceremony at the time of their civil marriage because the church they chose for the event was destroyed in an earthquake.

Tens of thousands of pilgrims were awaiting the pope in Iquique, where he was scheduled to celebrate an open-air mass on the shores of the Pacific on the third day of his visit.

Pope
Share
Subscribe to our newsletter
Sign up here to get the latest news, updates and special offers delivered directly to your inbox.
You can unsubscribe at any time

Osinbajo, Akande,Tinubu absent as Buhari host APC chieftains to a dinner at the Villa

Africa is important says U.S but no apology for Trump’s vulgar comments