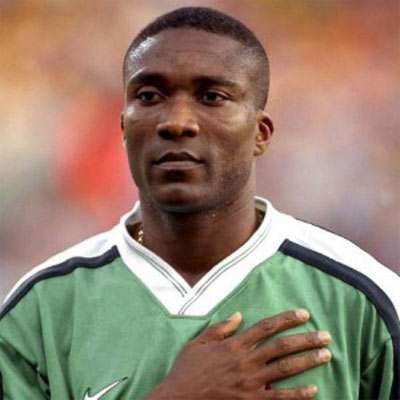 Today marks the 7th anniversary of the death of Super Eagles star, Uchenna Okafor, who was found dead in his Little Elm home, in the United States on the 6th of January 2011 shortly after dropping his daugther in school.

There has been controversy surrounding the death of the World cup star with Elm Police Department, claiming Okafor’s death a suicide, and his family, insisting there’s no way the footballer killed himself.

Ifeyinwa Okafor, asks God to erase the details from her memory. That image first seen from the corner of her eye, darkness against a white wall. For a moment she thought her husband was playing a prank.

” Time is soothing, but it is no cure, she said recently, wiping tears from her cheeks.

At first, she prayed for answers. Why would her husband end his own life? For southeastern Igbos such as the Okafors, suicide is  seen as a taboo and ultimate sin.

Feb 5, 2023
Later that month, in an odd twist, the family said they’d  seen an FBI report confirming Okafor had been murdered — though local FBI spokesman Mark White said he’s not sure what that could be about.

White, said the bureau wouldn’t investigate a suicide or homicide unless the case showed evidence of a civil rights violation. White adds that the FBI wouldn’t simply overtake a local investigation; a department would request its assistance.

With no help from the government of Nigeria, to press for further investigations Ifeyinwa Chigbo Okafor and her 22 year old daughter Tochukwu has left everything to God.
“I believe God will expose them,” Ify says now of her husband’s killers, her eyes direct and her voice strong.

“I do not believe Uche is capable of taking his own life,” says Victor Onyeujo, a longtime friend.

“It looks like one of those mysteries that can never be solved, said another friend who  grew up together with Okafor.

Okafor was a three-time African Cup of Nations champion, a defender with the Kansas City Wizards for five seasons, from 1996 to 2000. Prior to his death Okafor had been an assistant coach for the Associated Soccer Group and an analyst for ESPN.

There was no mention of the player by the Nigerian Football Federation on the player’s 7th anniversary.

Okafor played for ACB of Lagos, Hannover 96 in Germany, KRC Mechelen in Belgium, Ironi Ashdod in Israel, Kansas City Wizards in the US and  a member of the US 94 Super Eagles team.

He was a patriot and we pray that his soul continue to rest in peace, and may God continue to bless his family.

EaglesNigeriaUchenna Okafor
Share
Subscribe to our newsletter
Sign up here to get the latest news, updates and special offers delivered directly to your inbox.
You can unsubscribe at any time

UN urged to act on ‘slaughter’ of Benue residents