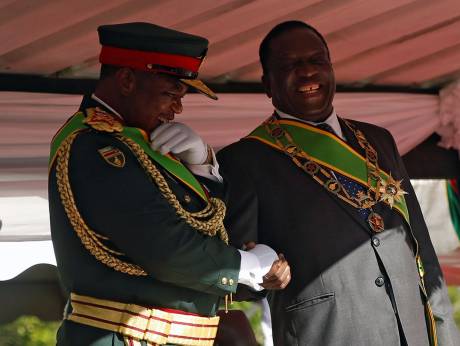 AP—Zimbabwean President Emmerson Mnangagwa gave his clearest signal yet on Tuesday that he would appoint as vice president the military leader who led the de facto coup that ousted former leader Robert Mugabe in November.

At a ceremony marking Constantino Chiwenga’s retirement and handover of the military reins to Phillip Sibanda at an army barracks near Harare’s international airport, Mnangagwa lauded Chiwenga for his consistency and steadfastness.

“I therefore urge you to maintain the same loyalty, robustness and dedication to duty as you move to your next assignment which is quite prominent,” he said without elaborating.

Mnangagwa said on Friday he would fill the two vice presidential posts in the following few days. Chiwenga is the top contender in what is seen as a reward for helping to end Mugabe’s 37-year rule.

Mnangagwa has appointed several senior military officers to his cabinet and the ruling party’s executive politburo since he was sworn in as president on November 24 in what some political analysts say reflects the army’s consolidation of power since it turned against the 93-year-old Mugabe.

Chris Mutsvangwa, special adviser to the president and the influential leader of the war veterans’ association, rejected criticism of the military appointments, saying they were not unique to Zimbabwe. He pointed to the former generals in US President Donald Trump’s cabinet.

He also denied a report by the privately owned NewsDay newspaper that he had said the army would play a role in elections due next year.

“It’s a lie … I said there was a team which helped to undo the dynastic tendencies of geriatric Mugabe and his mid-wife (sic),” he told reporters at his offices in Harare.

“I promised to the new president that we are going to deliver an electoral victory but that team specifically excludes the army because the army had played a role earlier and because the army is a professional army and does not get involved in election campaigns.” The elections are due by July 2018 but Mnangagwa has said they may be held sooner than expected.

Mnangagwa told members of his ruling ZANU-PF party on Friday they would have to start fixing the economy if they wanted a chance of winning next year’s vote.

The southern African nation’s economy collapsed in the latter half of Mugabe’s rule, especially after the violent seizures of thousands of white-owned commercial farms.

LeaderZimbabwe.Coup
Share
Subscribe to our newsletter
Sign up here to get the latest news, updates and special offers delivered directly to your inbox.
You can unsubscribe at any time

Shell, Eni to Be Tried Over $1.3 Billion Malabu Oil Deal