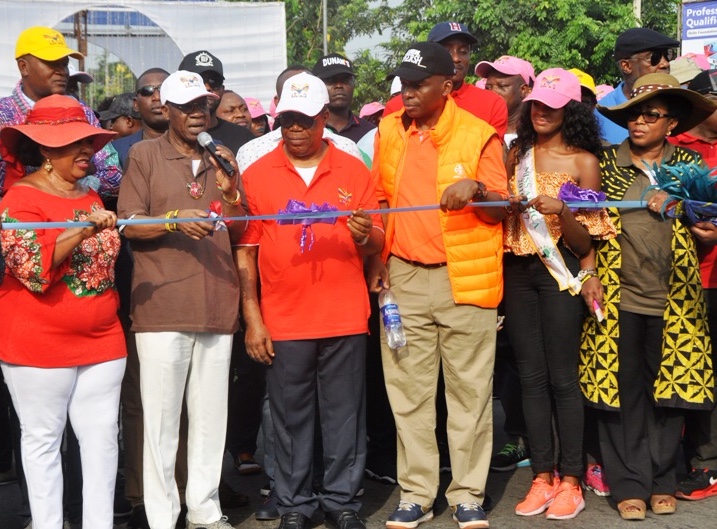 Share
The Minister of Information and Culture, Alhaji Lai Mohammed, has flagged off the third and final dry run of the Calabar Carnival with a pledge to help turn the event into a major global attraction.
“There is no substitute for preparation and that is why this dry run is very important,” he said in Calabar.
“I make bold to say that what is happening here today will reverberate throughout the world as we shall leverage the power of information and technology to bring this event to the notice of the entire world.
Alhaji Mohammed said the Calabar Carnival has grown into a major unifying factor in Nigeria because it serves as a rallying point for people all over the country.
He said the Calabar Carnival is now a platform for the youth to demonstrate their creative ability, and a practical demonstration of the nation’s drive to turn the creative industry into a viable creative economy.
“I want to take this opportunity to appeal to the world to see this street party beyond dancing and beyond the costumes. Let’s see this Calabar Carnival for what it really is, which is a platform for our youths to vent out their creativity and a platform to turn our creative industry into a veritable creative economy,” the Minister said.
He described the Calabar Carnival as the biggest street party in Africa, saying it has many unique selling points, being the longest carnival route in the world covering a 12-kilometre route.
Speaking earlier, the Chairman of the Carnival Commission, Mr. Gabe Onah, said this is the first time that a Minister will attend the dry run of the Calabar Carnival.
He commended Alhaji Mohammed for his uncommon support for the carnival, having earlier sent the Permanent Secretary of his ministry, Deaconess Grace Gekpe, to flag-off the second dry run in November this year.
The Calabar Carnival dry run is marked by dances, processions and displays by various groups across the major streets of Calabar.
The main event will be held 27-28 December and will attract participants from 25 countries.
Calabar Carnival
Share
Subscribe to our newsletter
Sign up here to get the latest news, updates and special offers delivered directly to your inbox.
You can unsubscribe at any time

75th Birthday: Buhari is Inspiration To The World,’ Ndoma-Egba Says