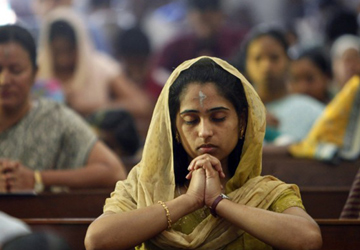 Police said 32 people were detained for trying to convert people to Christianity in the central Indian state of Madhya Pradesh Thursday, with a leading Catholic association condemning the accusations as “laughable”.

When a group of priests went to the police station to inquire about the detentions, their parked car was torched, allegedly by a mob belonging to a right-wing Hindu group, said Theodore Mascarenhas, secretary general of the Catholic Bishops’ Conference of India.

Instead of taking action against the attackers, the police detained the carol singers, a Catholic priest said.

“Some 15km from here in Dara Kalan village church they were getting ready for the Christmas celebrations, when a group of people attacked them, accusing them of carrying out religious conversion.”

The news comes as India’s Christian minority sounds the alarm over a recent rise in attacks on churches and members of the faith, blaming the violence on Hindu hardliners, who they say have become emboldened since Prime Minister Narendra Modi’s right-wing government swept to power in 2014.

“The charge of conversion on which the priests and seminarians [were] detained is frivolous and laughable,” Mascarenhas said in a statement on Friday.

He said carol singing had been a part of the Christmas season in Satna “for the last 30 years”.

However, City Superintendent of Police D.D. Pande said: “One Dharmendra Dohad has registered a complaint with us that he was paid Rs5,000 and converted to a Christian. “He was given a holy dip in a pond and his name was changed to Dharmendra Thomas, the complainant said. They also asked him to pray to Christ,” he said.

Police in Satna said they had detained the group for questioning after a resident complained about being “lured by a group of Christians to convert”.

Eight other priests who went to the police station to look for the detained group were also taken into custody, investigating officer Mohini Sharma said.

During their detention, a mob allegedly set fire to their car outside.

Christmas Carols
Share
Subscribe to our newsletter
Sign up here to get the latest news, updates and special offers delivered directly to your inbox.
You can unsubscribe at any time