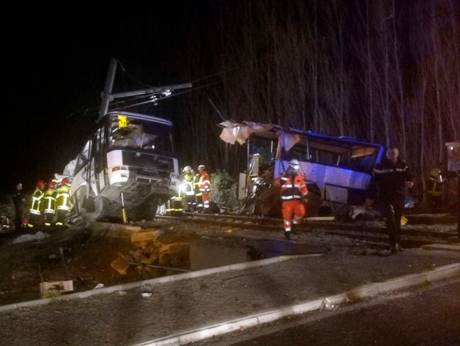 At least four children were killed and 19 people injured, seven seriously, on Thursday when a train crashed into a school bus at a level crossing in southern France.

The bus, which was carrying around 20 students from a local secondary school, was struck by the train in Millas about 18 kilometres west of the city of Perpignan, close to the Spanish border in mid-afternoon.

The dead and critically injured were all travelling in the bus. Of the 12 who suffered minor injuries, three were train passengers, police sources said.

France Bleu regional radio reported that the train ploughed into the rear of the bus. Pictures posted on French media showed the bus had been severed in two.

Feb 5, 2023
Around 95 emergency workers, backed by four helicopters, were deployed as part of the rescue effort. The crash site was cordoned off to the media.

Prime Minister Edouard Philippe, who flew to Millas by helicopter, said the process of identifying the victims was “extremely difficult”.

Twenty four people were caught up in the accident, including 20 children aged from 13 to 17, said Philippe.

The prime minister confirmed four deaths and said 11 of the injured were in critical condition with another nine in serious conditions in hospitals in the region.

“The priority at this stage is to be able to give precise information to the families,” Philippe said.

The local L’Independant paper cited one of the rail passengers, named only as Barbara, as saying the impact “was very powerful and we thought the train was going to derail”.

The reason for the collision was unclear but an enquiry into “involuntary homicide” was swiftly opened.

Franceschool busTrain
Share
Subscribe to our newsletter
Sign up here to get the latest news, updates and special offers delivered directly to your inbox.
You can unsubscribe at any time

BUA VS DANGOTE: Fights over mining site heats up