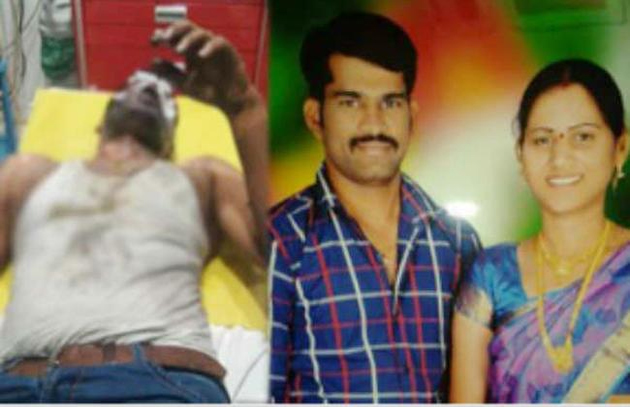 “She may be alive but for us she is as good as dead. We have performed her last rites. Even if she is released from jail we will not let her step in our home. She has left the entire family disgraced and we are not able to show our face to anybody.”

This is how Padma Reddy, mother of Swathi Reddy reacted when police told her that her daughter was the prime accused in the murder of her husband Sudhakar Reddy.

Her parents and her in laws were in deep shock after the sensational case came to light of Swathi colluding with her paramour in murdering her husband and disfiguring her paramour so he could undergo plastic surgery and pass off as her husband.

Meanwhile Swathi’s paramour and partner in crime Rajesh told the Nagarkurnool police that it was the idea of Swathi to kill her husband.

“After we fell in love I had told her to elope but she refused saying she had children and her parents will die of shame if she eloped”, he told police during questioning.

Rajesh, who was arrested from DRDO Apollo Hospital in Hyderabad on Thursday told the police that on the fateful night of November 26 Swathi got angry after an altercation with her husband and attacked him with a blunt object killing him.

“Fearing that if Sudhakar Reddy was missing other family members would become suspicious she suggested that I should undergo plastic surgery and take his place”, Rajesh told the police.

After disposing off Sudhakar’s body in a forest area the duo bought petrol in a bottle and it was used to cause burns on the face and hands of Rajesh, police inspector Srinivas Rao said.

After disfiguring him, Swathi admitted him to a local hospital in Nagarkurnool and informed her in laws and parents that Sudhakar Reddy was injured in an attack by four persons.

Later Rajesh was shifted to DRDO Apollo Hospital in Hyderabad where the sinister plot was exposed by Rajesh’s strange behaviour and different physical appearance noticed by the family members.

When Nagarkurnool police arrested Swathi Reddy and questioned her, she spilt the beans on the plot.

“I had no enmity with Sudhakar Reddy and I had no intention of killing him,” Rajesh told the police. “The entire plan was hatched by Swathi and I went along.”

Rajesh also told police that Swathi had developed marital discord with her husband and she used to share details of her unhappy life. “We met when she had come to my physiotherapy centre two years ago and developed intimacy. In the absence of Sudhakar Reddy we also used to meet at her home”, he told police.

Sudhakar Reddy of Bandlapally village under Teklapally Mandal and Swathi of Gattunelli village had married in 2010 despite opposition of their parents. It was a love marriage. After working for some time in Hyderabad Sudhakar Reddy returned to Nagarkurnool where he took a stone crusher unit on lease. The family with two children was staying in a rented house in Nagarkurnool. Their six year old son and four year old daughter are now in the care of their maternal grandparents.