Why Buhari appointed the Ndoma-Egba/Nsima Ekere led NDDC Board 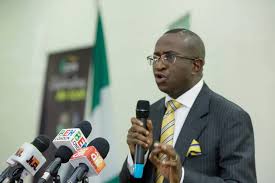 Share
By
JESUTEGA ONOKPASA
Former Bayela Governor, Timipre Silva and current Minister of State for Agriculture, Heineken Lokpobiri have been fingered as the brains behind the quite desperate moves to unseat the present Niger Delta Development Commission, NDDC, board way before its tenure should elapse under the law. While Silva is permuted to be angling for the ministerial slot of Bayelsa in view of the much speculated reboot of the President Muhammadu Buhari cabinet, Lokpobiri, on his part, seemingly jittery about being without a job if and when his boss, Silva takes his current one for himself, apparently wants to be the next NDDC Managing Director/CEO. While the duo have done little, if anything, to counter the allegations, those believed to be their errand boys have flown completely off the handle, claiming the present board was appointed to complete the tenure of its predecessor and that its tenure expires this December, all the while accusing President Buhari of corruption unless he sacks it!
Don't Miss