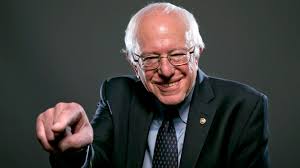 The 2020 presidential election is Senator Bernie Sanders’ race to lose, according to a new survey of more than a dozen top Democratic strategists.

The survey,  conducted by the Hill, reveals a Democratic field crowded with old faces. At a time when the party could use some fresh blood, most contenders for commander-in-chief have been around for decades. Sanders, who will be 79 years old in 2020, currently leads the pack.

“His people have never gone away,” Democratic strategist Brad Bannon told The Hill. “And he has a loyal core following out there that will be with him come hell or high water.” Sanders is the most popular politician in America, with an approval rating of 75 percent, according to a recent Harvard-Harris poll.

Since losing the 2016 primary to Hillary Clinton, Sanders has toured the U.S. to promote his political group, Our Revolution, and his Medicare-for-all bill. His frequent travel has led many to speculate that he’s drumming up support for another presidential run. Advisers to the Vermont senator also have indicated that he’s eyeing the top job. When one of Sanders’ associates was asked if his team was thinking about another run, the associate simply said, “Yes, is the answer.”

Sanders considers himself a Democratic Socialist, and is registered as an Independent in the Senate but ran as a Democrat in the 2016 election. Bannon says that since 2016, Sanders far-left politics have been embraced by Democrats at large. “The Sanders wing is becoming the dominant wing of the party,” he said.

Sanders’ Medicare For All Act of 2017, which promotes a single-payer healthcare plan, is now supported by a third of Senate Democrats. When Sanders presented a version of the bill in 2013, he was unable to garner any support at all.

2020Bernie SandersTrump
Share
Subscribe to our newsletter
Sign up here to get the latest news, updates and special offers delivered directly to your inbox.
You can unsubscribe at any time