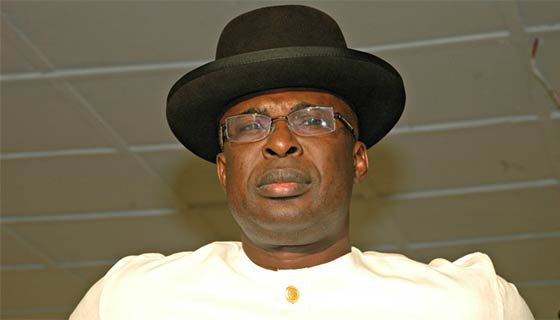 Former governor of Bayelsa state, Timbre Sylva, is behind an audacious plot to further impoverish the people of the Niger-Delta for his own selfish interest, says The Initiative For Leadership And Economic Watch in Nigeria.

The group Thursday said it has uncovered a dangerous and clandestine plot by the ex-governor and some frustrated politicians in the Niger-Delta to cause mayhem and destabilize Niger-Delta Development Commision, NDDC.

“We wish to alert the Niger- Delta people and the entire Nigerian public to an evil plot by enemies of the region working to rubbish the efforts of the Buhari government’s developmental agenda for the region.”

“disgruntled individuals and treasury looters are sponsoring smear campaign against the leadership of the Niger-Delta Development Commision, NDDC, to destabilise the region, said the group in a statement signed by Ambassador Agbonkpolor F. Splendour, Executive Director and Comrade Abdulaziz Yusuf, National Secretary.

It noted that these individuals served no other purpose than to achieve such inglorious aim.

The group accused former Bayelsa state governor Timipre Sylva of conniving with some leaders in the region to work against the Buhari administrations’s development agenda in the region.

“The devilish design consists of a vicious smear campaign against the chairman of the Niger-Delta Development Commission, Senator Victor Ndoma-Egba, the MD Mr Nsima Ekere, in form of newspaper adverts/articles and sponsored television documentary dripping of lies and slander as well as intimidation and sponsored demonstrations.

“We are aware that some media organizations, mindful of the laughable and libelous contents, had responsibly rejected the said adverts/documentaries in spite of the huge  money offered them in dollars.

“They believe that by sponsoring targeted attacks in the media to discredit the NDDC leadership and trigger chaos, they will realise their ambition of dipping their hands into the commission’s treasury.

Contrary to reports that the present board of the Niger Delta Development Commission (NDDC) got an illegal extension, the office of the secretary to the federal government, SGF, has denied any tenure elongation for the board members as alleged.

In the letter titled : “Re: Clarification on the tenure of the governing board of NDDC”, and sighted by by journalists declared that the Ndoma- Egba headed board is not a continuation of the dissolved one headed by Bassey Henshaw.

“Section 5(2) of the act refers to a situation where a vacancy occurs as a result of any of the provisions of section 5(1) of the act as opposed to when the entire board is dissolved .  In this case, the previous board was dissolved and its tenure extinguished, the letter states

“Dissolution of the board cannot be categorised as a vacancy under the act. Dissolution signifies total extinguishment of the board, it simply ceases to exist and there cannot be any remainder of any term which a successor is expected to complete.

“There has to be a fresh composition of the board for a fresh term of four years. Therefore the letters of appointment stating that they were to complete the remainder of the tenure of the previous board is of no effect as the words   n a letter cannot override the express provisions of an act”.

Furthermore, subject to the provisions of section 4 of the establishment act, a member of the board, other than an ex-officio member, shall hold office for a term of 4 years at the  first instance and may be re-apointed for a further term of 4 years and no more.

The group advised the former governor and a serving minister of state in the present Buhari cabinet to work together with the NDDC to develop the region.

Anyone that has issues with President Muhammadu Buhari is advised to be bold enough to man up and approach him to table their demands instead of this unwarranted action capable of destroying the administration’s plan for the region.

The Era of sharing the money is over, the statement concluded.

NDDCNiger-DeltaNigeriaSylva
Share
Subscribe to our newsletter
Sign up here to get the latest news, updates and special offers delivered directly to your inbox.
You can unsubscribe at any time