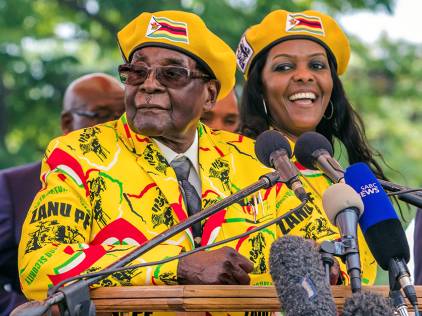 Zimbabwe’s army said Wednesday it has President Robert Mugabe and his wife in custody and is securing government offices and patrolling the capital’s streets following a night of unrest that included a military takeover of the state broadcaster.

The night’s action triggered speculation of a coup, but the military’s supporters praised it as a “bloodless correction.”

For the first time, this southern African nation is seeing the military oppose Mugabe, the world’s oldest head of state and one of the longest-serving authoritarian rulers. Mugabe has been in power since Zimbabwe’s independence from white minority rule in 1980.

Armed soldiers in armored personnel carriers stationed themselves at key points in Harare, while Zimbabweans formed long lines at banks in order to draw the limited cash available, a routine chore in the country’s ongoing financial crisis. People looked at their phones to read about the army takeover and others went to work or to shops.

In an address to the nation after taking control of the Zimbabwe Broadcasting Corporation, Major General Sibusiso Moyo said early Wednesday the military is targeting “criminals” around Mugabe, and sought to reassure the country that order will be restored.

It was not clear where Mugabe, 93, and his wife were Wednesday but it seems they are in the custody of the military. “Their security is guaranteed,” Moyo said.

“We wish to make it abundantly clear that this is not a military takeover,” he said. “We are only targeting criminals around (Mugabe) who are committing crimes that are causing social and economic suffering in the country in order to bring them to justice.”

MugabeZimbabawe
Share
Subscribe to our newsletter
Sign up here to get the latest news, updates and special offers delivered directly to your inbox.
You can unsubscribe at any time