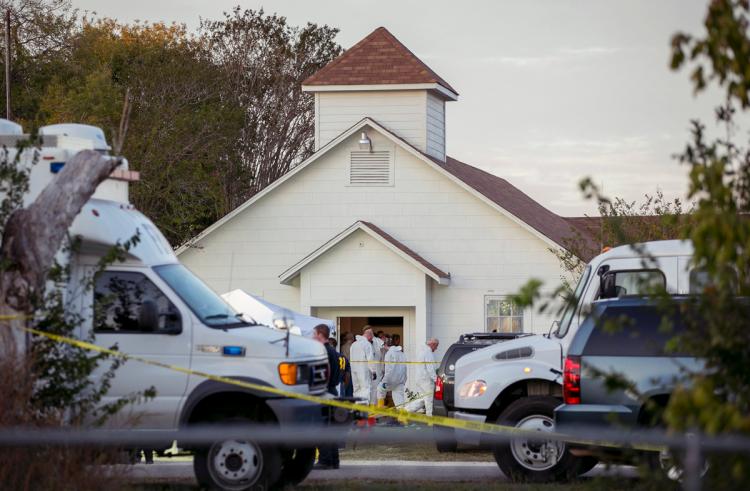 Within hours of the horrific shooting at the First Baptist Church in Sutherland Springs, Texas, Democratic lawmakers, progressive political pundits, and media figures were calling for gun control on social media.

Former Arizona Rep. Gabby Giffords, who still struggles to speak and walk after being shot in the head in her district in 2011, also implored her former colleagues to act.

“I’ve seen great courage when my life was on the line. Now is the time to come together,” the Democrat said.

A bipartisan push to ban bump stocks seems to have stalled in Congress. The House has yet to hold a committee hearing.

Shannon Watts, founder of Moms Demand Action, a group that demands gun restrictions, blasted Texas Gov. Greg Abbott and other defenders of gun rights. And she noted the irony of invoking the power of prayer after a massacre at a church.
“If thoughts and prayers alone prevented gun violence, we wouldn’t be shot in places of worship,” she tweeted.

A gunman opened fire Sunday at First Baptist Church of Sutherland Springs, Texas, in a rural area outside of San Antonio. Here’s what we know:

At least 26 people were killed, not including the gunman, Texas Gov. Greg Abbott said Sunday night at a news conference. Of those, 23 died inside the church, two were outside the church and another victim was transported to a hospital and died, said Texas Department of Public Safety regional director Freeman Martin. Another 10 people were wounded.

Annabelle Renee Pomeroy “was one very beautiful, special child,” her father said.
Frank Pomeroy had been in the neighbouring state of Oklahoma at the time of the shooting, and was driving back to Texas after the tragedy.

Other victims included a six-year-old boy named Rylan who was in surgery after being shot four times, his uncle told CBS News. A two-year-old was also shot and wounded, The Dallas Morning News reported.

The gunman was identified as Devin Kelley, 26, of nearby Comal County, Texas

ChurchshootingTexas
Share
Subscribe to our newsletter
Sign up here to get the latest news, updates and special offers delivered directly to your inbox.
You can unsubscribe at any time