No evidence of accountability for police and other officials who have abused journalists in Nigeria, Says U.S Government 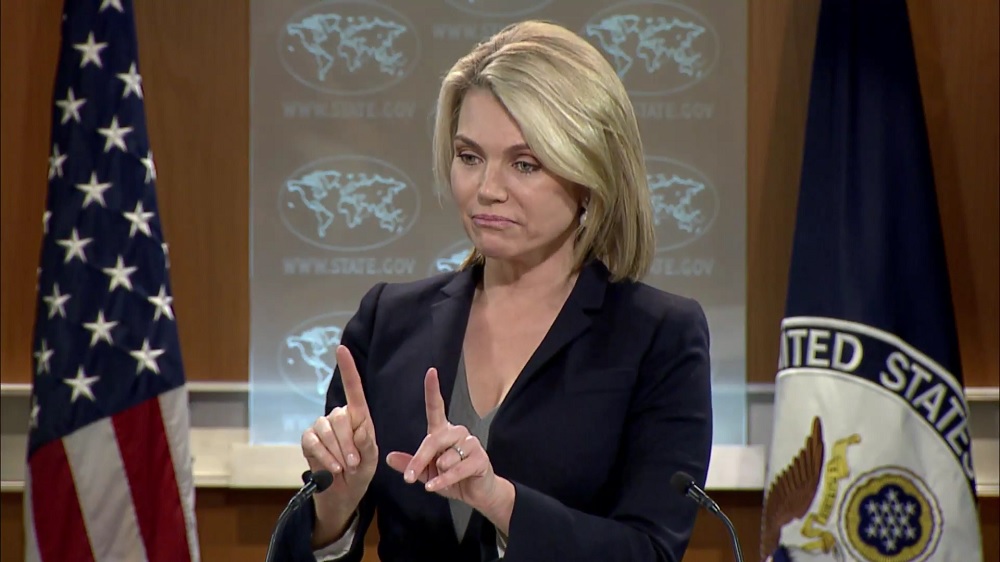 [dropcap]I[/dropcap]n Nigeria and South Sudan, there is no evidence of accountability for police and other officials who have abused journalists the United States said Thursday On International Day to End Impunity for Crimes Against Journalists.

“In Nigeria and South Sudan, there is no evidence of accountability for police and other officials who have abused journalists, said Heather Nauert, State Department Spokesperson in
Washington, DC.

“For the third year in a row, Somalia holds the world’s worst record for unsolved murders of journalists, she said.

“Together with others in the international community, we will continue working to eliminate impunity for crimes against media professionals.”

“The United States renews its dedication to promoting a free, professional, and independent press abroad, and to advocating for accountability for those who would undermine a free press with threats, intimidation, and violence.”

“In Russia, the lack of progress towards any accountability for the killing of high profile journalists persists.”

“In Turkey, perpetrators of attacks against journalists or independent media institutions often receive minimal penalties. This impunity has been exacerbated by the use of the judicial system to target independent media.”

“In Azerbaijan, nine out of ten physical attacks against journalists go unsolved.”

“Around the world, journalists work often at great personal risk to report on issues that impact the lives of individuals in all societies. They shine a light on abuses and corruption, expose threats posed by transnational criminal organizations, and counter disinformation and propaganda that spread false narratives. These efforts play an indispensable role in the healthy functioning of our own democracy and also underpin democratic values around the world.”

“Due to their profession, journalists are often under threat from those who wish to silence them. In too many parts of the world, crimes against journalists go unpunished.”

“In Syria, both local and foreign journalists have regularly been attacked and killed while reporting on the conflict. In Venezuela, the government arbitrarily closes media outlets as punishment for reporting facts, or maintaining an editorial line, critical of the regime. Security forces and armed “colectivos” that harassed and physically attacked journalists during protests earlier this year remain unpunished.”

“In Iraq, media workers report accounts of intimidation, death threats, and harassment. In Sudan, the government arrests, harasses, and intimidates journalists with impunity. In Uganda, government officials intensified their crackdown against freedom of expression, including by intimidating journalists.”

Meanwhile, in a statement the The International Press Centre, IPC, said Nigeria continues to rank high among countries where press freedom and freedom of expression are under threat stating that the database of its Safety Alert Desk reveals not less than fourteen incidents of assault, threat, battery, arrest, kidnap, killing and invasion involving journalists and media institutions within the last one year.

1. Jerry Edoho of Ibom Nation Akwa Ibom State: He was picked up in Uyo by police personnel from the Force headquarters in Abuja on January 6.
2. Nsebiet John of The Ink, Akwa-Ibom State: He was detained for a night in police cell, arraigned and granted bail to the sum of N250,000 on January 6.
3. PREMIUM TIMES, Abuja: The premises was invaded by armed police officers on January 19.
4. Dapo Olorunyomi, Publisher, PREMIUM TIMES and Evelyn Okakwu, Judiciary correspondent: Both were arrested by armed police officers on January 19.
5. Godwin Aliuna of National Mirror, Ebonyi State: He was attacked by alleged armed robbers in his residence on February 22.
6. Famous Giobaro, journalist with Bayelsa State-owned radio station, Glory FM 97.1: He was shot dead by suspected hired assassins on April 16.
7. Samuel Nweze, Publisher of the People’s Leader: He was shot by gunmen in front of his office in Abakaliki on June 2.
8. Charles Otu of the Conscience Newspaper: He was beaten to stupor with dangerous weapons and later abducted by suspected political thugs in Abakaliki on June 2.
9. Lawrence Okojie of Nigerian Television Authority, Benin: He was shot dead by gunmen at 8 p.m. while returning from work on July 8.
10. Amadin Uyi of Silverbird Television, Abuja: He was brutalized by police officers during the protest by Ourmumudondo group at Unity Fountain in Abuja on August 8.
11. Segun Salami of Channels Television, Kogi: He was battered at the state house detention centre by security personnel attached to Kogi State government house on August 28.
12. NUJ secretariat, Abia State: Invaded by Nigerian soldiers of Operation Python Dance on September 12 during which some journalists were assaulted.
13. Wale Odunsi, an editor with Daily Post (online publication): He was reportedly attacked by security officials at the Kogi State government house on October 11.
14. Ikechukwu Ibe of the Daily Trust Newspapers: He was allegedly brutally assaulted by an Army captain at Jabi area of Abuja on October 26.
The Director of the IPC, Lanre Arogundade, said these were unwelcome development deserving the attention of media stakeholders.

IPCJournalist in Nigeria
Share
Subscribe to our newsletter
Sign up here to get the latest news, updates and special offers delivered directly to your inbox.
You can unsubscribe at any time

Adeosun: Naira will Continue To Get Stronger