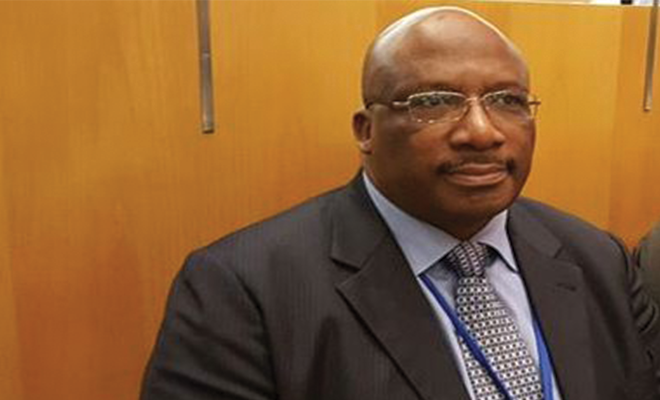 [dropcap]M[/dropcap]inister of Interior Gen Abdulrahaman Bello Dambazau, early Tuesday morning said that he had nothing to do with the deployment of ex-chairman of the Presidential Task Force on Pension Reforms, Abdulrasheed Maina, to the ministry of interior.

Dambazau told Per Second News that reports in the media that he initiated the deployment is ‘untrue’.

“Untrue. I have nothing to do with deployment of civil servants. Except the Permanent Secretary, no civil servant is directly answerable to the Minister. ”

“The Minister only deals directly with the PS. The Minister did not set up any Committee, and had no hands in the reinstatement and deployment of anyone, he said

Maina, a fugitive accused of complicity in a N2bn fraud was last month reinstated as an acting director in the Ministry of Interior.

The  Head of Service,  Mrs. Winifred Oyo-Ita, in a statement Monday claimed that Maina’s reinstatement and subsequent posting did not originate from her office.  Curiously, the office of the HoS forwarded the decision of the Interior Ministry to the FCSC in a letter dated August 14 with reference number HCSF/LU/COR/FCSC/749/III/135. 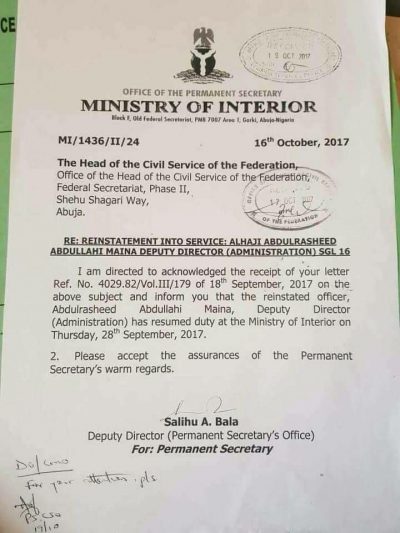 The letter said: “Kindly refer to the Attorney-General of the Federation/ Honourable Minister of Justice letter Ref. No. HAGF/FCSC/2017/ VOL. 1/3 dated 27th April 2017 requesting Federal Civil Service Commission (FCSC) to give consequential effect to the judgment that voided the warrant of arrest issued against A.A. Maina which formed the basis for the query and his eventual dismissal.

“Further to the aforementioned letter, the Federal Civil Service Commission (FCSC) at its meeting held on 14th June, 2017 deliberated on the Attorney-General of the Federation (AGF’s) letter and requested the Office of the Head of the Civil Service of the Federation (OHCSF) vide letter FC.4029/82/VOL.III/160 of 21st June 2017 to advise the Permanent Secretary, Ministry of Interior to consider the AGF’s letter, the Officer’s case and make appropriate recommendation to the Commission.

“The OHCSF accordingly advised the Ministry of Interior to consider the matter. The Ministry of Interior at its Senior Staff Committee (SSC)’s meeting held on 22nd June, 2017 considered the disciplinary case against the Officer and the letter by the Attorney-General of the Federation and Minister of Justice seeking the reinstatement of the Officer as a Director (Administration), SGL. 17 in the Federal Civil Service.

“The Ministry of Interior’s Senior Staff Committee (SSC) deliberated on the case and recommended that Mr. Maina be reinstated into the service as Deputy Director. SGL. 16. The Office of the Head of the Civil Service of the Federation (OHCSF) vide letter Ref. No. HCSF/LU/ COR/ FCSC/749/III/ 135 dated 14th August 2017 forwarded the recommendations of the Senior Staff Committee (SSC) of the Ministry of Interior to the FCSC for further necessary action.

“The FCSC at its meeting held on Wednesday, 16th August, 2017 considered the letter from the Attorney-General of the Federation and Minister of Justice and the recommendations of the Senior Staff Committee (SSC) of the Ministry of Interior on the disciplinary case against Alhaji Abdulrasheed Abdullahi Maina, Deputy Director (Administration), Salary Grade Level 16.

“The FCSC, thereafter, approved the reinstatement of the Officer into the Service with effect from 21st February, 2013(being the date he was earlier dismissed from Service).

“The FCSC also approved for the Officer to sit for the next promotion examination to the Post of Director (Administration), SGL. 17.”

An Official of the ministry of interior alleged that Mr Maina has been seen a couple of times in the ministry of Interior, ” He comes to the office with police escorts and a DSS agent, he said.

DambazauMaina
Share
Subscribe to our newsletter
Sign up here to get the latest news, updates and special offers delivered directly to your inbox.
You can unsubscribe at any time

Baba, Maina, Idris and other stories By Reuben Abati