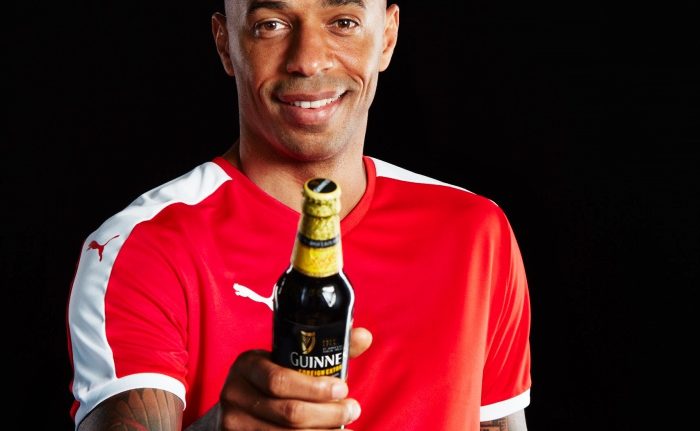 In a thrilling first for football fans across Africa, Guinness is announcing a major new partnership with legendary footballer, Thierry Henry; an international football icon of the highest calibre. As part of its Made of Black programme, Guinness will be working with Henry to celebrate the unique passion of African fans and their Made of Black spirit.

Henry is famous for his time at the English Premier League Club Arsenal, where he was part of a team that won two league titles and three FA Cups as well as leading his team to the 2006 UEFA Champions League Final in his role as captain. Named Professional Footballers’ Association Players’ Player of the Year twice, and the Football Writers’ Association Footballer of the Year three times, Thierry Henry enriched the football viewing experience for all fans of the sport regardless of team loyalties.

He will work with Guinness in Nigeria and across Africa to shine a light on those who demonstrate their Made of Black spirit.

Commenting on the partnership, Thierry Henry said, “I am incredibly excited to be working with a globally renowned brand like Guinness. The Made of Black campaign is something I can really relate to. I have heard a lot about the huge passion for football that exists in Nigeria. I can’t wait to see for myself their Made of Black spirit.”

This season, Guinness will be celebrating and uniting passionate football fans and rewarding them through incredible football experiences that only Guinness can provide. This will include Fanzone activations for thousands of fans across the country with live football and music experiences. In addition, Guinness will continue to sponsor EPL broadcasts through DSTV ensuring that all football fans can continue to follow their passion with friends and family over a cold Guinness in their homes or at their favourite bar.

Adenike Adebola, Marketing Director – Guinness added, “We are really excited to be working with such a football legend this year. Henry carved his own path to bring his creative flair to the game, he worked hard to demonstrate his skill and ability; ultimately changing the way the game was played in England and showing that he was truly Made of Black. He is an inspirational ambassador for our Made of Black campaign.”

Guinness will also be celebrating everyday football heroes over the next year. Those passionate about football who have shown their own Made of Black spirit and gone above and beyond to fulfil their football dreams and inspire others.

Guinness embodies the Made of Black mindset. It is an iconic beer that has the darkest liquid, but the brightest flavours. A beer that has lived in the hearts and minds of millions in Africa and across the world for over 250 years but has always had the authenticity, boldness and vision to do things differently.

GuinnessNigeriaThiery Henry
Share
Subscribe to our newsletter
Sign up here to get the latest news, updates and special offers delivered directly to your inbox.
You can unsubscribe at any time

Lionel Richie Concerned With His Daughter’s Relationship With Scott Disick